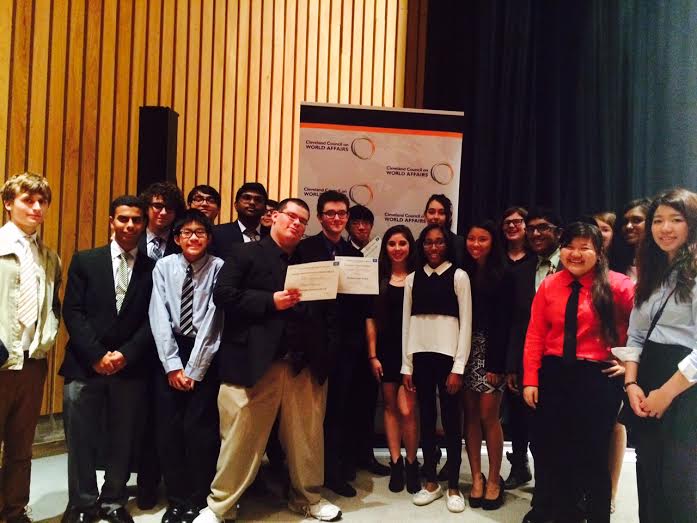 The Mayfield World Affairs club attended and succeeded in the Cleveland Council on World Affairs Model UN conference on the fourth and fifth of November.

Numerous high schools from Northeast Ohio partook in the event held at the Cleveland Bar Association.

Several Mayfield students stood out amongst the rest. Isaac Bykhovsky and Louis Liu, representing China, won the award for the best position paper in the Security Council.

He and Liu had to work diligently to handle their given situation in the council. This involved tackling the current events that were heating up the debate in real-time.

Seniors Jed Suntheimer and Kent Lui, as Russia, won Honorable Mentions in the Commission on the Status of Women.

All the students prepared deeply for the debates, and it showed. The amount of time spent on research, practice, and preparation was truly worthwhile.

The club’s social advisor, May Xiao, said, “It was extremely gratifying to see every one of the member’s hard work pay off and watch them carry themselves like true delegates in each of their committees.”

This hard work was the focus of numerous afterschool meetings. Research, discussions, and practices were conducted in order to prepare. Because of this dedication, the students thrived at the conference.

Junior Saiaravind Sompalle is content with the turnout as well. He said, “This year at the Cleveland Council of World Affairs competition in downtown, I was with senior Alan Trester in the Security Council as Chad. It was really difficult but fun—especially when you have other Mayfield kids there, like Isaac Bykhovsky and Louis Lui representing China.

“MUN has been a key part of high school for me,” Sompalle said. “You learn about different countries and issues around the world. Sometimes your country is the most random place on Earth, like Tuvalu, a Pacific Island nation—this just makes it really interesting.”

The experiences the students have in such events teach them about public speaking, cooperation, communication, and additional skills necessary for life.

Junior Surya Gopal knows this firsthand. She said, “Model UN has taught me how cooperation and compromise are really the only ways things get done, especially on an international scale. Yet it’s still important to make sure your voice is heard. If people understand all the perspectives on a certain issue—and, as a result, all the facets of that issue—it can lead to a more cohesive resolution.”

These hardworking club members will now prepare for their future conferences, including New York City in March 2016. The high school is even hosting its own Model UN conference on Dec. 9, with three different committees to choose from.

“The NYC conference is particularly interesting because there are international students who may have new and unique perspectives on issues,” Gopal said. “It’s important to research your country thoroughly so that you can take the stance that best represents your country.”