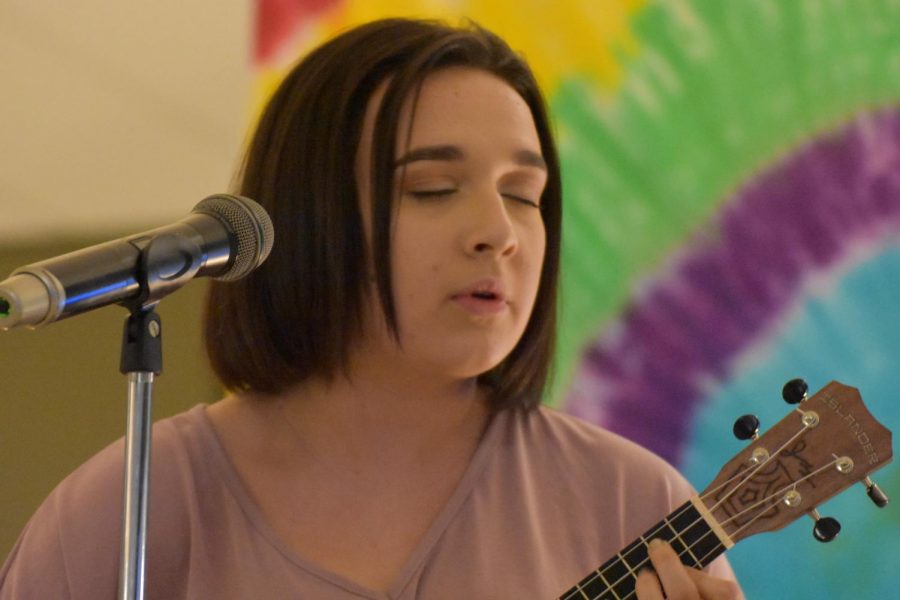 Junior Angelina Beukemann performs a song on the ukulele at Open Mic Night. The event was a successful fundraiser for the junior class, as they have been raising funds to subsidize the cost of prom tickets.

The junior class has raised money to reduce the cost of prom tickets through creative fundraisers.

Bobby Zajec, the president of the junior class, helps create and organize the fundraisers. Zajec said, “Usually me and the other officers either meet or text and we come up with ideas in order to raise money. Once we have an idea down, we set a date and start getting the details down such as: what we are marketing towards, what we expect of our delegates, etc.”

Gina Burich is the junior class adviser who joins the representatives in student council to brainstorm ideas that they could use as fundraisers. She said, “Prom is soooo much work! The junior class has to host several events, such as: open mic, bake sales, and coupon book sales. We also used local meal places [like] Big Boys and made over $400 in profits. All the money goes to prom rental of facilities and venue.”

Burich is content with the amount of money that was raised so far this year. She said, “So far we have raised $5,000 and are still fundraising up to date. We don’t have a set goal to reach, but we would like to make as much money as possible.”

Fundraising has not been easy this year, Burich recalls. She said, “Fundraising depends on how much money you’re given the previous year; the money follows you. So the freshman money goes to the sophomores’ account, the sophomores into the junior account, and then when I’m done with prom, whatever is left over goes to the senior account. So it’s very important that each grade raises enough money. Unfortunately that has not been the case recently.”

Burich also said, “Being that prom is at such an expensive venue this year, we’ve had to fundraise a lot more than previous years. Also, unlike homecoming, the school doesn’t receive all of the money from the tickets. For each child that purchases a ticket, we’ll make about $5 because we have to pay for the venue. So in total I’m thinking we’ll make around $3,000.”

Silver agrees with Burich when it comes to the challenges that were faced for the fundraisers. She said, “It’s really great having so many people to help us think of fundraisers and ways to raise money but it’s also very overwhelming. We want to make sure that everyone has a say in what we’re doing and we try to include everyone as possible. Sometimes it’s hard though hearing everybody’s thoughts and deciding on what’s most beneficial for us as a class.”

Zajec said, “For the future we plan on doing more bake sales and a cosmetology night at the high school, where the cosmetology girls will do makeup and manicures for a $10 charge. We also are currently planning on doing a six and seventh grade lock-in for the end of April!”

Along with the new fundraisers created there is also a new method of paying for the tickets this year. Burich said, “I moved everything to a digital platform, so one can only pay through Infinite Campus via credit card, so the whole process has been revamped.”

Silver said, “We are hoping to find a big fundraiser to finish off the year with. Something that will really draw people’s attention and make them want to participate, we’re still deciding on what to do and what will bring in the most money to support us.”

Burich is excited for prom and is so proud of what the junior class has done. Prom is May 18th at the Rock n’ Roll Hall of Fame in Downtown Cleveland. Tickets go on sale next week for $70.