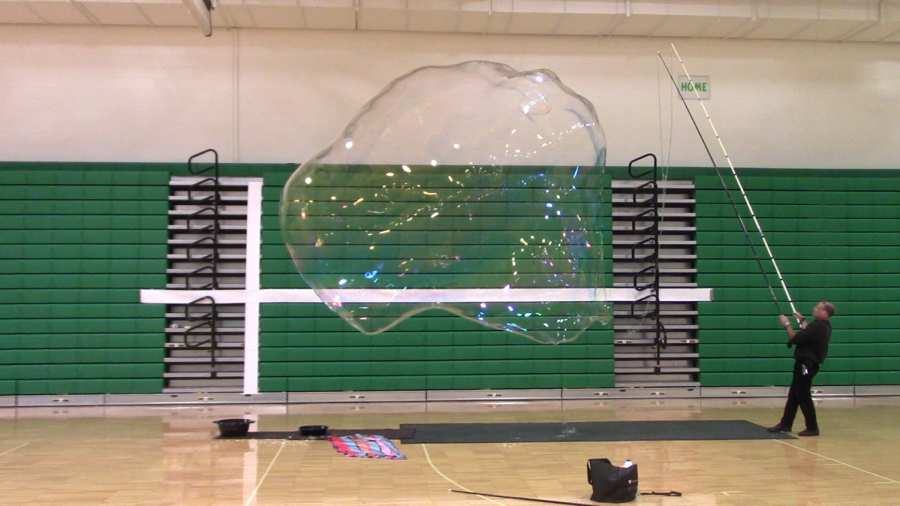 Gary Pearlman performs a test run of the bubble in the Wood Gym.

Students in Kim Thompson’s and Bill Selent’s Math 4 Physics class are trying to break the Guinness World Record for the world’s largest bubble.

These Math 4 Physics students are working with Gary Pearlman, the former record holder for the world’s largest indoor bubble. Pearlman, a Mayfield resident and self-proclaimed bubbleologist, said his record was defeated and is now trying to win it back.

Senior Trevor Cowgill says he was very intrigued when the project was first introduced to his class. “Initially, I thought it was going to be a lot easier to complete the calculations for the project, but it has turned out to be difficult at times. I did think it was really cool to have an opportunity to help Gary reclaim his record for Guinness,” Cowgill said.

As project manager, Bill Selent coordinates all the different aspects of the job.  He said, “It’s kind of defaulted right now mostly to interacting with Gary and Trevor. We look at the experiments that Trevor’s running, helping them as much as possible, and letting them run with it.”

Selent admits he might not have all the answers, but still assists and tries to knock down any obstacles his students may face, as well as provide as much support and motivation needed to his class.

Senior Sveidy Vasquez says this whole project took off when Pearlman contacted Selent. “Gary reached out to Mr. Selent in hopes of having him help him with calculations and different procedures to try and help him break the record again,” said Vasquez.

Because the Math 4 Physics class is really driven on projects, Vasquez found the assignment to be ideal for her and her classmates. “We have sets of teams in our class that will focus on creating the calculations,” she said.  “Trevor Cowgill is the brain of the whole thing in my opinion and does really well with the calculations.”

Vasquez and her class are currently reaching out to the headquarters of Guinness world records to submit a proposal. “I am the head writer of the proposal that must be sent out in order for Guinness to approve our steps, so we can attempt breaking the record,” she said.

The biggest challenge the class has faced is confirming the accuracy of their calculation method. “Basically proving that the number that we calculate on the computer is the actual volume,” Cowgill said. “It’s also a struggle to make sure our method turns out the same every time and we’re getting the right numbers, so we can figure out what we need to do to get the closest number.”

Cowgill says Pearlman will be coming back to the high school for a final test run. “We need to make sure we can accurately and confidently confirm that we are within ten percent range of the actual volume. I trust our method, I trust our system and I think everything will turn out nicely,” Cowgill said.

From what she’s heard, Vasquez says it will take up to a few weeks for Guinness to process the proposal and then accept or decline it. The Math 4 Physics class is currently working on a date to attempt the record, since they had to reschedule their original date.

Although there is a lot of hope, Cowgill says he does have some concerns moving forward. “I fear there may be some type of human error with the setup, because it does involve a lot of people. When we test it, we need all the fans in the gym turned off, and if nobody contacts the janitor to get that done, the air in the room could pop the bubble. I’m also concerned that our scale factor isn’t in the right place or is slightly tilted [because] it could affect the calculation.

“But I do have more faith in our team than doubt so I think we’re all feeling good about the final outcome for the project,” Cowgill said.

Selent says that he is very excited to finish the project and is thrilled that he and his students have the opportunity to break a world record. “Gary is a very enthusiastic person, but can be difficult to work with at times,” Selent said. “You really just have to recognize who you are working with. It’s like being a manager in sports, everybody’s different, every player is different.”

If Pearlman breaks the record, the Math 4 Physics class hopes they’ll be included in the Guinness Book of World Records. “We’re not really sure what the credits will read if he breaks the record, but we are planning to host the event in our gym and invite some other classes, so it would be really awesome if we were noticed in helping him break this record,” said Vasquez.