Opinion: Anti-vaxxing your child could do more harm than good 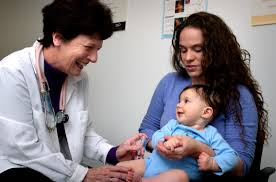 A baby receives a vaccination shot from a doctor.

There are 2 to 3 million fewer deaths in the world each year because people are vaccinated and protected.

Parents who choose to anti-vax their children need to learn the dangers of it and how it could bring more bad than good.

While searching Google News, I came across an article about a child who had never been vaccinated, fighting for his life due to receiving tetanus. According to a Gizmodo article, the U.S has “had a working vaccine for tetanus since the 1920s, and vaccination has virtually eliminated the disease in countries with decent healthcare.”

Tetanus used to be a very common disease. Now, thanks to the evolution of medicine and doctors, there is a way to prevent people from receiving this disease. People who have not had this vaccine are much more likely to get Tetanus which is also very difficult to treat and very expensive.

According to the Gizmodo article, the little boy’s family “ended up spending 57 days in the hospital, with a bill of $811,929 […] that’s about 72 times the average cost of a hospital stay for a kid, according to research cited by the authors.” That is a lot of unnecessary worrying and money for something that could have been easily preventable with a simple shot.

Another source that I came across from Marketwatch talked about how teenagers are rebelling against their parent’s beliefs and are choosing to ignore them and vaccinate themselves.

Sophomore Sofia Bonnarigo wants to go to college to become a nurse. She said, “These children have the right to do what they want with their own body. It is healthy for people to vaccinate themselves whether their parents want that or not.”

Teenager Ethan Lindenberger was the creator of a subreddit page dedicated to encouraging anti-vax children to vaccinate themselves. He believes that most parents make this decision due to rumors and false information concerning vaccines instead of factual information.

Lindenberger’s mother, along with many other people involved with the anti-vaccination movement, believes that certain vaccines contain direct risks to autism. However, a 10-year study for this specific concern found that there is “no link between the MMR [a highly contagious and dangerous disease] (measles, mumps, and rubella) vaccine and autism, even among children with other risk factors for autism.”

Though this may be only proof for one vaccine, this also proves that most vaccination concerns are false or are based on false information.

Tina Monastero is a health teacher here at MHS. She believes that parents should protect their children by providing them with vaccines. She said, “There are signs that you look for after vaccination that if you see these signs, you go to the doctor and they can counteract that reaction.”

Even if there are concerns or risks that come along with vaccination, they can be treated and go away. They also aren’t nearly as harmful as the diseases that somebody could potentially get from anti-vax.

Bonarrigo agrees that the benefits of a vaccination outweigh the potential dangers. She said, “By vaccinating your children you are making sure they are healthy and preventing many bad things that can possibly happen to them.”

Back in the times of the Black Plague, yellow fever, and smallpox, thousands of people were dying every single day. The reason why most countries don’t even have to worry about these deadly diseases anymore is that a vaccine was developed for them. If one was never created, it could have killed thousands of more people and been an issue for much, much longer.

Monastero is currently talking to her health class about the dangers and risks of STIs. She said, “I mean look at now, talking to my kids in class about sexually transmitted infections. Yes, there is a vaccine for Hepatitis, yes there’s a vaccine for HPV. Two infections that could cause somebody to die. Getting that vaccine can help prevent those things from happening.”

Many children and many families have been unfortunately impacted by diseases such as measles and tetanus due to the choice of a vaccine being potentially harmful. Not vaccinating your children could actually end up being even more dangerous than not.

It just takes a simple payment for a simple shot to avoid all of that worrying and possibly the loss of someone very special.