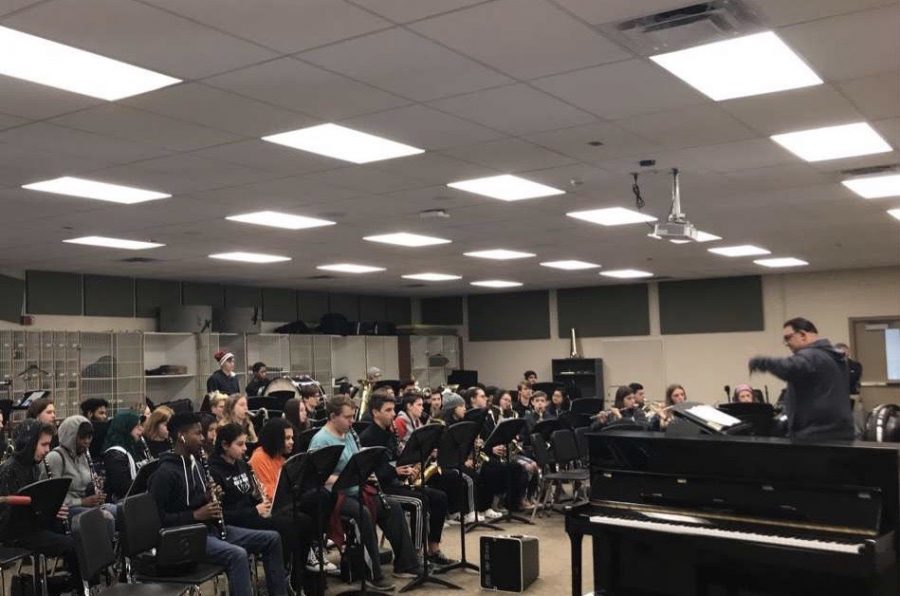 Mike Palermo instructs the band during class on Friday, Feb. 21. Each band has spent the last two months working to prepare for the winter band concert, which takes place in early March.

In an exclusive interview, The Paw Print’s Kevin Bluffestone sat down with three instructors in the music department – Mr. Fancher, Mr. Palermo, and Mr. Treiber – to discuss the winter band concert, which is occurring on Wednesday, March 4.

Kevin: What songs are you performing?

Fancher: “We are performing ‘Arachnophobia and Fugue,’ which is kind of telling the story of a spider creeping along, while incorporating some famous Bach pieces. We are also playing ‘Scarborough Affair,’ which is the setting of the classic folk tune, and we have the adventure begins, which is a very high flying adventurous sounding piece. And lastly we have ‘Electricity,’ which is very interesting and unique.”

Palermo: “We are playing a march called ‘Barnstormers March,’ the ‘Halo Suite’ from the video game Halo, and a tune called ‘Shadows Unleashed’.”

Treiber: “Wind ensemble is playing ‘Abide with Me,’ ‘Invictus,’ which is a Carl King march, and ‘Majestia’.”

Kevin: What has been difficult for your band?

Fancher: “A lot of it is getting parts to come out clearly and equally because there is a lot that happens with certain instruments and playing certain parts together.”

Treiber: “The goal is to choose music that is challenging, but obtainable in the short amount of rehearsal time that we have for a concert. So one of the balances when picking music is addressing areas that need specific work and growth, but also it has to be something that is going to be a success for the students.”

Kevin: What is your favorite song your band is performing and why?

Fancher: “I really like ‘The Adventure Begins.’ I think it is fun and upbeat, and feels like Indiana Jones in a way.”

Palermo: “I like ‘Shadows Unleashed’ because it is an original piece. I also like it because it has the piano part that Gretchen (Zito) will play with us, which we have never done before.”

Treiber: “I don’t know if I have a favorite because every one of the pieces is different. I guess I like certain aspects of each piece.”

Kevin: How has your band improved since last concert?

Fancher: “We are much more confident and playing with a much stronger tone.”

Palermo: “Tone, reading ability, and playing as a unit [are ways we’ve improved].”

Treiber: “Any time an ensemble has more time playing together, they will improve every day.”

Kevin: What challenges has your band overcome?

Fancher: “Making sure everyone is contributing and putting out a good quality sound [is challenging].”

Palermo: “Playing as a unit and playing together [are challenges].”

Treiber: “[The students] are doing a good job executing certain complexities in ‘Invictus,’ and in ‘Abide with me,’ it is in some very difficult keys that they are not used to playing in.”

The concert takes place in the auditorium on Wednesday, March 4 at 7pm.  Admission is free.