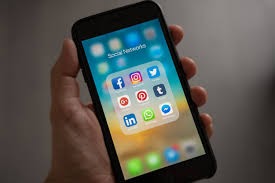 The number of social media apps is increasing,  and so are its effects on people.

With the rise of social media among today’s generation, it makes sense to consider the effect prolonged social-media use has on teens, as this is a major problem.

Studies published in the Canadian Medical Review Journal have shown that more social media use can lead to more trouble with the mental health of adolescents. More specifically a link between extended social media usage and a higher level of anxiety and depression as well as lower self-esteem, especially in girls.

Rebecca Finotti, a health teacher, believes that teens require a break from technology and social media. Finotti said, “I don’t feel teens get to shut down. I think they’re constantly being stimulated, and some of that stimulation is negative. I see kids worried about how many likes they get…”

Finotti also thinks parents should take some of the responsibility for their teens’ social media use.

“I know Apple was going to do more parental controls to limit times on some things because the brain needs that rest. If a parent has more control over that, they can open that window of when they can work on it and close it at other times,” Finotti said.

The lack of guidance from parents is a problem in and of itself. Parents must teach their children proper usage and moderation when it comes to social media. If they do not, their children will continue to suffer. Teens have quickly become overly invested in the world of media.

Finotti believes that parents can start a healthy dialogue between the parent and child about the negative effects of social media.

Finotti said, “Tell them [their children] how they love them and want the best for them to be successful socially, physically, and mentally.”

Junior Bibby Boclear uses social media in moderation. According to him, he engages in social media about two hours over the whole day.

Boclear believes that social media can have an effect on teens’ mental health. Boclear said, “People have this standard that other people on social media may have, but also maybe not because some may not care what others think.”

Social media platforms are also beginning to take action to help eradicate some of the harm social media has done to teens.

Mark Wilson of Fast Company reported that Snapchat is adding a feature inside of their app to help teens get help with their mental health. Jen Stout, Vice president of global policy at Snapchat told Wilson, “Instead of being served up maybe nothing, or meme accounts, or something like that, we’re looking for a healthy alternative to provide young people with tools that would be readily available in the app.”

It has become clear, even to the creators of the problem, that we as a society need to do something to prevent this generation and future generations from going down a destructive path. Parents and teens alike need to join together to have a real conversation about the effects of social media and the abuse of technology. If that doesn’t happen the problem will never be solved.