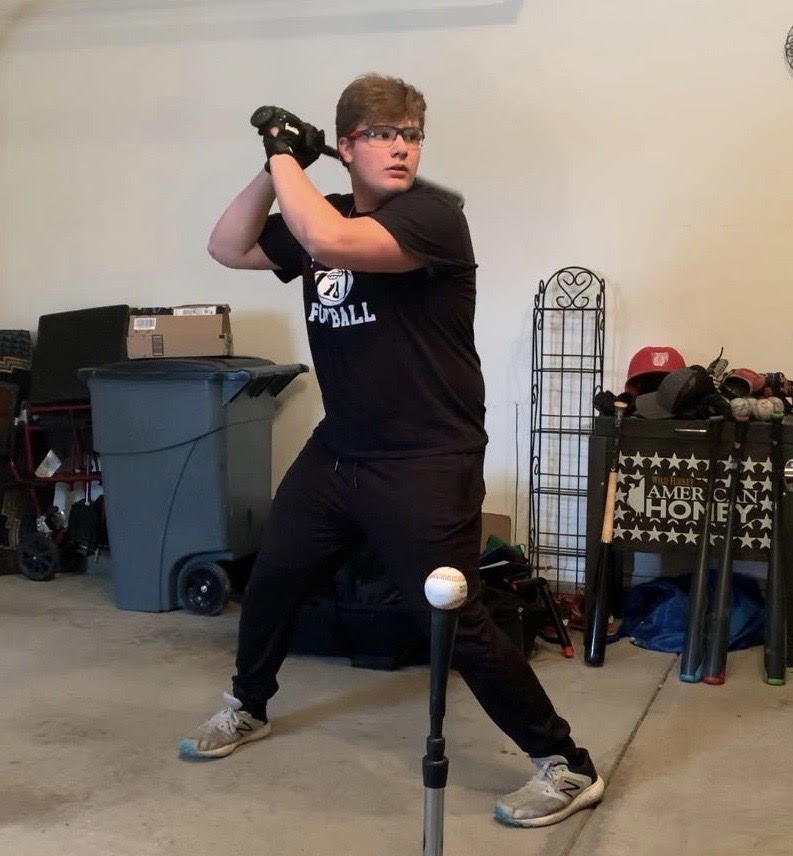 NO BATTING CAGE, NO PROBLEM: Dylan Gamber sets up a baseball tee and net in his home to practice his swing while under quarantine.

COVID-19 has resulted in plans being shut down for many athletes in the Mayfield community.

Wide receiver Antonio Darjay, a junior at John Carroll, was supposed to go to Italy this summer with his team. He said, “Honestly, it’s really tough because it’s [the start of] my senior year, so we don’t know if we will have an opportunity to do it again. It has kinda messed with us a little bit, put us on edge that the one thing we were looking forward to and the one thing we saved up for for the past two, three years has been taken away from us in a matter of seconds without even a discussion of having the opportunity of doing it again next year.”

Athletic Director Keith Leffler has been in contact with the Ohio High School Athletic Association regarding the end of the winter sports and start of spring sports season. “Obviously the spring season has been suspended since March 16th and the governor’s and the OHSAA’s directives forbid any type of group workouts. This has forced student-athletes to try to maintain some sort of physical and mental conditioning at home.”

Darjay has set up an at-home gym to stay fit. He said, “When we found out the gym was closing, [my housemates and I] went out and bought a bench with a few weights, a few dumbbells, and bands you can attach to a door. Even though it’s not a lot of weight, it’s better than nothing.”

Mayfield sophomore Dylan Gamber has also found a way to stay in shape. He said, “During this quarantine I’ve been staying in shape by lifting because I have lifting equipment at home and a lot of sprints, a lot of mobility stuff, like using a ladder, along with just stretching every day and try to make sure my body stays in physical shape so as soon as we come back I am ready to go.”

Leffler believes that the lack of sports could cause some problems for student-athletes aiming for athletic scholarships. Leffler said, “The NCAA has postponed on-campus visits and has stopped coaches from visiting high school players, for obvious reasons. It will be interesting to see what colleges do if they do not return to campus until the first of the year as some have hinted at.”

Gamber said he’s put in a lot of work over the off-season to attract the eyes of college scouts. He said, “My concern for the baseball season being cancelled is that all the hard work I put in the off-season to get to this point is gone and that there is a possibility that I won’t have a baseball season. The worst thing is that I have looked forward to this season since last baseball season, working as hard as I could, just trying to get scouts to look at me. It could be taken away in an instant.”

The quarantine not only affects athletes and coaches, but it also affects the officials on the fields, including Stan Urankar of the Eastern Cuyahoga County Umpires Association. He said, “I would say the biggest thing is disappointment. The guys want to be out there working and almost every member of our association had assignments through April when all of this started going down. As much as athletes love playing and coaches love coaching, umpires love officiating.”

During this period of time there is a lot unknown about what will happen to sports. Leffler said, “I am not sure how this translates to colleges and high schools, which is the challenge of having so many unknowns right now. Developing plans will largely be dependent on what return-to-school plans look like.”