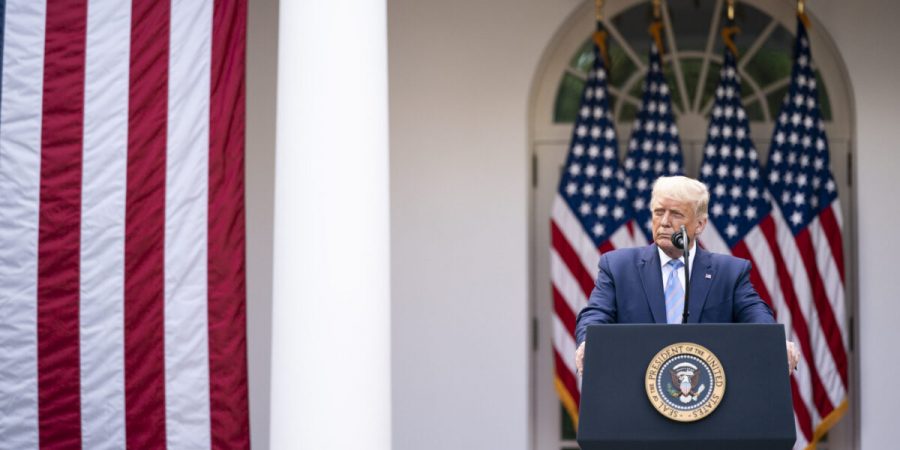 President Donald Trump delivers remarks about the military at the White House. While Trump has encouraged a powerful and well-funded military, Joe Biden wants reduced, responsible military funding and said, “Our military is [just] one tool in our toolbox. “

With the presidential election around the corner, many Americans are reviewing the positions of Donald Trump and Joe Biden on many key issues, including the U.S. military.

When Trump, a Republican, campaigned to be president in 2016, he promised to make better use of the military than the Obama Administration did. The Trump Administration believes they’ve kept that promise, especially with the elimination of the ISIS caliphate and their leader Abu Bakr al-Baghdadi. After American troops raided the residence of al-Baghdadi in Oct. 2019, Trump said, “The thug who tried so hard to intimidate others spent his last moments in utter fear, in total panic and dread, terrified of the American forces bearing down on him.”

Trump also takes credit for increasing defense spending and “rebuilding the military.” In 2017, the Trump Administration signed the National Defense Authorization Act, which granted $738 billion in defense spending and also gave paid leave and a pay increase to military personnel. Despite this, a Military Times poll in Aug. 2020 of over 1,000 active service members revealed that only 37.4% of them intend to vote for Trump.

In addition to increased use and spending, the Trump Administration sees an expansion of the military with the U.S. Space Force. Trump said in Dec. 2009, “Amid grave threats to our national security, American superiority in space is absolutely vital. And we’re leading, but we’re not leading by enough; but, very shortly we’ll be leading by a lot.”

While Trump has vowed to use the military, the Democratic candidate, Joe Biden, has made a campaign promise to do more for military families. The topic is personal for Biden, as his son Beau joined the military in 2003 and later was deployed to Iraq in 2008. The official Joe Biden website states, “The Bidens understand the sleepless nights, wondering if your deployed loved one is safe.”

As the former Vice President in the Obama Administration, Biden claims that he’s already shown that he will help military personnel. He, his wife Jill, and Michelle Obama, created Joining Forces, which focused on finding jobs and helping those who were honorably discharged from the military. However, the Bidens have endured criticism about their family members in the military, as their son Hunter was dishonorably discharged when a urine test revealed cocaine in his system in 2014.

In terms of funding the military, Biden believes the military can still be effective without overspending on a defense budget. He accuses Trump of being wasteful on his defense spending, and that America can be powerful in ways beyond its military use. “We have become over-dependent on the military to advance our security interests overseas and underinvested in other tools including diplomacy, economic power, education, and science and technology,” Biden said to the Military Officers Association of America.