With safety protocols in place, students return for in-person learning 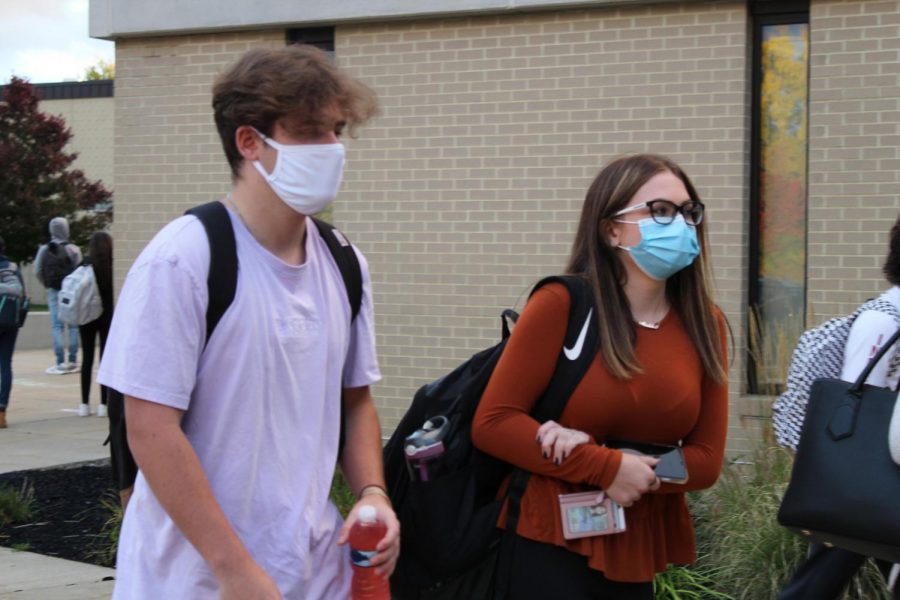 Mask Up! Senior Chris Capuozzo and students in grades 10-12 walk into the building last Monday for the first time since March. However, many students fear that the school will shut down. Senior Kyla Chercourt said, "I definitely think school will be shut down again. That’s why I’m trying to enjoy as much of my senior year as I can!”

At the beginning of last week, students in grades 10-12 were allowed to return to the high school for in-person learning.

Sophomore Albana Selgjekaj chose to go back in-person because she found remote learning to be “difficult” and “stressful.”  She said, “Although my teachers sought to make the experience as normal as they could, it just wasn’t [productive] to the way I learn. It’s also really refreshing being able to see all our peers again as well as being able to interact with our teachers.”

However, junior Sarah Carlile decided to go back to school in-person because she simply wanted to be back in the building.  She said, “It’s been such a crazy year and I didn’t want to become too comfortable being online. Having been out of the building (and stuck at home) for nearly seven months and knowing I’d have to go back out there eventually, I just wanted to bite the bullet and go for it.”

Despite the adjustments of returning to in-person learning, Selgjekaj is surprised that the transition has gone fairly smoothly.  “Neglecting the fact that following the arrows posted throughout the school, and that trying to find the most effective route to getting to your next destination may be very confusing, the transition was very straightforward. Every teacher that I either do or don’t know is always eager to help me get to where I am going and to follow the appropriate procedures,” she said.

Selgjekaj admits she misses the breaks and early release time of remote learning.  She said, “Although I still do have release time, it is not the same experience I had throughout online school. For instance, my first release time I have to spend in the gym because it isn’t rational to leave during that time given my schedule.  One thing I’ve also had to adjust to is going back to working in a loud environment.”

The 90-minute block class in-person is also an adjustment for Carlile, who thinks students need to find a new normal.  She said, “I’d say it’s taken a toll on me. I definitely miss certain aspects of being online, mainly little things like the comfort of working out of my own space and having opportunities to take breaks whenever I needed; I had a really awesome setup.”

Lunch is also different for in-person learners, and Selgjekaj thinks it can be frustrating to sit with kids during lunch that aren’t her friends.  She said, “I feel like we are restricted to be with a group of people that we may not favor than if we were able to choose to be with other people we are more fond of. Having the ability to choose our lunch group would be really nice.”

Fewer classes and less movement during the day also means that students are less likely to see their friends, which Chercourt says is disappointing compared to last year.  “I usually saw a lot of people every day, but now I only see a few of my friends. For example, having band class online feels strange because I was so used to seeing people in that class every day, and being able to hang out in the band room,” said Chercourt.

Of all the changes, Carlile believes one-way hallways are the most difficult adjustment.  “Don’t get me wrong, I understand the importance of it, but at the same time, there’s nothing as frustrating as while it once took me only two minutes to get to a class, it now takes me three times as long. However, the adjustments are nice because we can carry our backpacks around all day now in substitute to making locker stops, and I actually have really benefited from that,” she said.

Looking ahead, Selgjekaj isn’t sure that in-person learners will be able to remain at the high school, but she’s impressed by the district’s plan to be safe.  She said, “I think that the Mayfield students and faculty are doing a great job at trying to contain the virus and making the most logical and universally beneficial decisions needed to create a safe learning environment.”

Carlile worries that a few students who don’t follow the rules might cause the school to shut down, regardless of how many preventative measures are put into place.  She said, “I watch kids on social media go out and party without a mask and without socially distancing, and I can’t help but think ‘What do you expect to happen?!’ It’s infuriating to me.”