Mayfield's first musical in over a year begins tomorrow 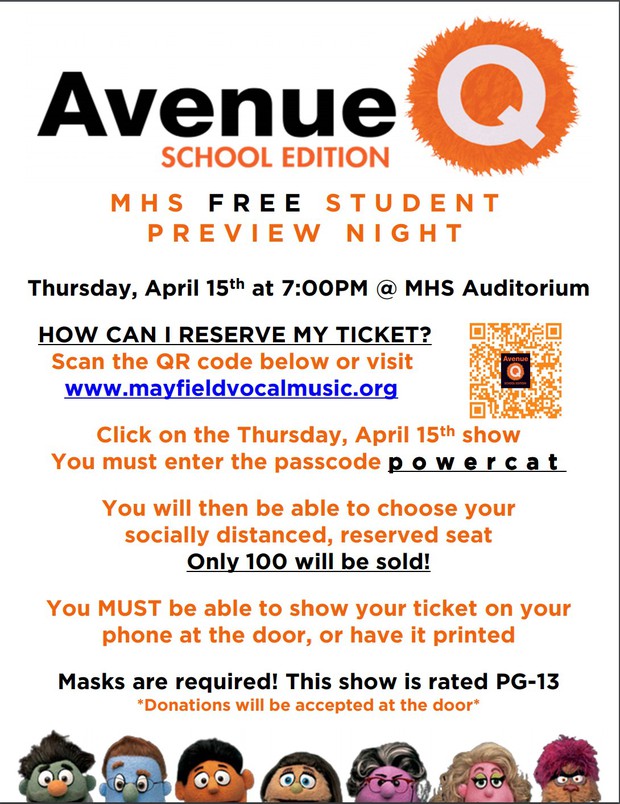 The vocal music department has been finalizing their rendition of “Avenue Q,” as the show is set to debut to students tomorrow night.

Brian Fancher, the musical director, believes it’s been easier to socially distance at rehearsals since the cast is so small, and half of them are puppets. Fancher said, “Even though we’ll be masked the whole time, for a lot of the characters, you’ll actually see some mouths moving, because they’re puppets.”

Another perk of “Avenue Q” is the relative lack of major choreography, making social distancing much easier for Larry Braun to manage. Braun, who is the musical director and choreographer, said, “In the songs where choreography is added, I did not have to make any special changes because of COVID.”

Masks have been a prominent challenge the cast has faced, due to the lost ability to convey facial expressions for acting. To adapt to this, Fancher said, “We’ve had to adjust so that all of it can be done with your eyes or, in this case, with puppets, or with your voice.”

Learning the music has been a major change for the cast, as they’ve had to learn their parts of the songs at home. Fancher said, “A lot of [the music] has been offloaded for students to work on at home, where I’ve provided digital resources that they can work on individually so that when we come together, it’s less teaching and more practicing it and getting that rehearsing down.”

The musical is to be performed live in the auditorium from Thursday to Sunday. However, due to restrictions, Fancher said, “We’re keeping [the auditorium] to a limited capacity. I believe currently it’s 25% capacity, so each show will only be able to have about 200 or so maximum.”

Due to this limited capacity, the budget has been largely affected. Braun said, “With our entire budget coming from ticket sales and fundraising, the limited capacity of 25% will make it very difficult to cover our costs.”

The musical experience for the audience will not be the same as other years. Fancher said, “We won’t have any concessions for sale, and we won’t have any meet-n-greet with the cast afterward.”

For both the cast and directors, the rehearsal of the music has been incredibly different, with their rehearsal time being limited to about 30 minutes at a time. Fancher said, “We’ll sing for a little bit, then we have to move and do something somewhere else so that the air can ventilate properly.”

Despite the restrictions of COVID-19, the quality of the show has not lessened. Fancher said, “For the kids that are in the show, they’ve been aching to do something like this for so long that they are giving it 100%.”

Paris Bunch, an ensemble member of “Avenue Q,” is happy to perform despite the struggle, rather than not doing a musical at all.

Both Bunch and Fancher describe the show as hilarious. “It also touches on some sensitive issues as well, and I love the fact we have puppets in the show as well. It’s new for everyone and we’re learning together,” Bunch said.

According to the production crew, the rehearsal process has been running smoothly. Fancher said, “It’s been a lot of fun working on it so far. It’s good to be able to do something like this because it’s been such a long time since we’ve been able to.”