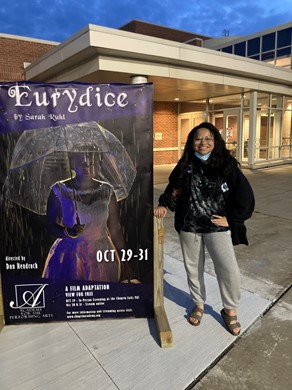 Senior Angie Ball has been promoting the upcoming production of "Eurydice," which debuts on Vimeo on Oct. 30. The Academy for the Performing Arts is part of the Excel TECC program and is located on E. Washington Street in Chagrin Falls.

The Paw Print’s Genny Kootsouradis sat down with senior Angie Ball to discuss her upcoming role in “Eurydice” at the Academy for the Performing Arts in Chagrin Falls.

Genny: I’ve heard from some of my friends that are in the Academy that you got the lead role in the show that they’re working on.

Ball: I did! It’s been really cool so far.

Genny: Other than this show, what kind of theater experience, in general, do you have?

Ball: I did theater camp for about four years over the summer and then I was in ‘Shrek’ freshman year. Then, I was going to be in ‘Beauty and the Beast’ sophomore year, but then it got canceled because of Covid. For Academy junior year, I was in ‘A Christmas Carol’ but that was a radio play so it was just voice recordings. Then I was in ‘The Laramie Project’ which was like a film play. ‘Eurydice’ is the most recent thing I did.

Genny: What would you describe ‘Eurydice’ as?

Ball: It’s pretty contemporary. It’s based on a Greek myth.

Genny: What kind of show is it? Is it a movie like ‘Laramie’ was?

Genny: How different is filming a movie out of your performance instead of being on a stage in front of actual people?

Ball: It’s a lot easier because there’s a lot less pressure if you make mistakes because they can just yell, ‘Cut!’ and you can do it over. At the same time, it’s different from being on stage because there’s no live audience. The filming process takes a really long time.

Genny: Which one would you prefer?

Ball: It kind of depends. If it was a film, I’d rather have a main role because it’s a lot less pressure than having a main role on stage. But, I love being in the ensemble in on-stage shows.

Genny: Is the show completely run by students in the Academy?

Genny: Who does costumes and makeup for the Academy?

Ball: We have a costume director named April, and she pretty much provided all the costumes and she did the hair and makeup. That was all her.

Genny: What’s it like doing performances with kids from all over the county?

Ball: It’s really fun! A lot of the people in the Academy are really talented, and they’re really fun people. I’m glad that I had the opportunity to meet them through the Academy and do shows with them.

Genny: What kind of things did you have to do to practice for the show?

Genny: So rehearsals were every day?

Ball: Every day except for Tuesdays and Sundays.

Genny: How long were they?

Genny: What kind of things do you do at rehearsal?

Ball: In the beginning, it was mostly just practicing and learning what we had to do, like what movements we had to do. The crew was building all of the set pieces when we practiced. Then it was basically just filming and doing scenes over again to get them right.

Genny: What is this show about? I don’t think I’ve ever heard of it before.

Ball: It’s about the main character, Eurydice, and she’s in love with a guy named Orpheus who is pretty much the son of Hercules’ singers, I’m not sure what they were actually called. Anyways, he makes music. Then Hades pretty much tricks [Eurydice] into dying so that he can marry her, and she meets her father in the Underworld and they reconnect. Then Orpheus tries to get to the Land of the Dead to save her.

Genny: That sounds really interesting. Is there any way for people outside the Academy to watch the film?

Ball: Yeah! It’s gonna be on this app called Vimeo. It’s pretty much like YouTube and you can stream it for free on there.

Genny: What day will it be available to watch?

Genny: I’m looking forward to watching it! Thank you so much for sitting down with me.