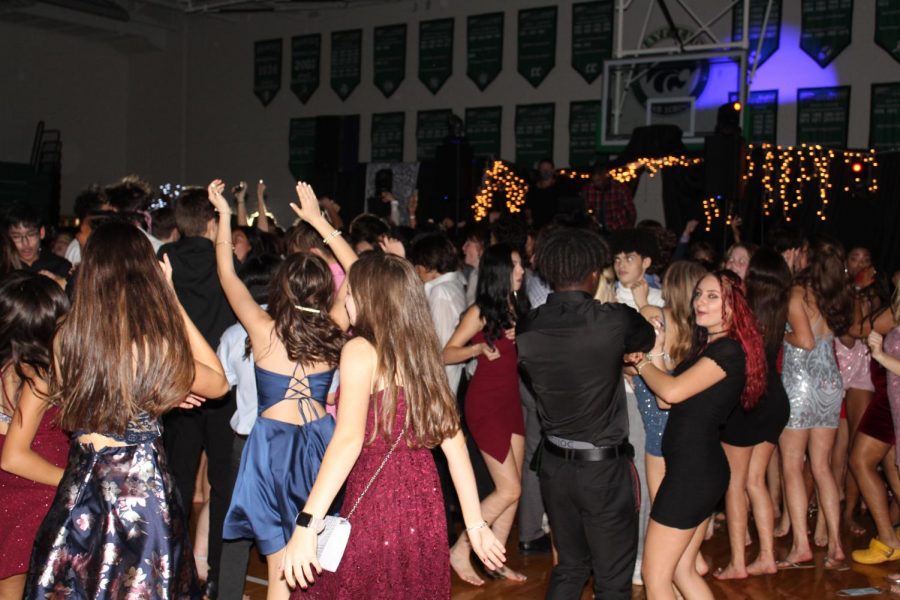 SELL OUT CROWD: Students dance in the Wood Gym to enjoy the first homecoming dance since 2019.

Although the past couple of years have been disappointing with events being canceled due to the pandemic, students found that this year’s homecoming dance was worth the wait.

Sophomore Victoria Kunc was happy with her experience, as this was her first year going. She said, “I did not have any expectations, since I have never gone before. However, because so many students were excited about it, I was definitely looking forward to it”

On the other hand, junior Adrienne Fekete was impressed with how the dance was set up this year. She said, “Homecoming did exceed my expectations because it was way more fun than I expected. The gym looked really cool with the decorations and lights, and the music was also really good.

Similarly, senior Bella Vigliotti felt like the dance was different this year due to the heightened anticipation of the students. She said, “It definitely met my expectations. It was fun, and there were definitely a lot of people who went because there was obviously not a homecoming last year.”

For Kunc, she felt like her plans were relatively normal. “As a group, we took pictures and got dinner before the dance. After, we went to a friend’s house to hang out,” she said.

For Fekete, she thought that the plans she had with her friends were pretty fun. She said, “Before the dance, my group and I went to a golf course to take pictures and have dinner, and then after the dance we went back to my friend’s house and watched movies.”

While Vigliotti also did such activities with her friends, her group was a bit more spontaneous. She said, “Before the dance, I took pictures for my sister and her homecoming group, and then took pictures with my own group. After, we headed out to dinner and then stopped at Drug Mart to get ice cream. That was a really fun moment because it was so random.

“After the dance, I went with my friends to watch ‘Squid Games,’ and that was really chill so it helped balance out the night,” Vigliotti said.

In terms of memorable moments during the night, Kunc felt like her experience was pretty on par for a homecoming dance. She said, “It was pretty normal for me, but was still a good experience.”

Fekete and her friends, however, were able to experience the full effect of a homecoming dance. She said, “My friends and I went to the very front of the crowd and were squished by lots of people.”

For Vigliotti, being able to dance with so many people was a new experience. She said, “Dancing in the giant crowd was pretty memorable. I had never done that in past years for homecoming and doing that was definitely an experience I won’t be able to forget.”

Looking back on the night of the dance, Kunc enjoyed the choice of music and the dancing. She said, “My favorite part of the night was the fun songs that we were able to dance to.”

Fekete recalled how her friends danced to many of the songs that were played that night. She said, “I enjoyed it when all my friends were singing a song together that we really liked.”

Vigliotti also found that being able to spend time with her friends was the best part of the dance. She said, “Just seeing my friends and having a good time. I liked the concept of being carefree for a night and that was definitely what homecoming offered for a lot of people, including myself.”