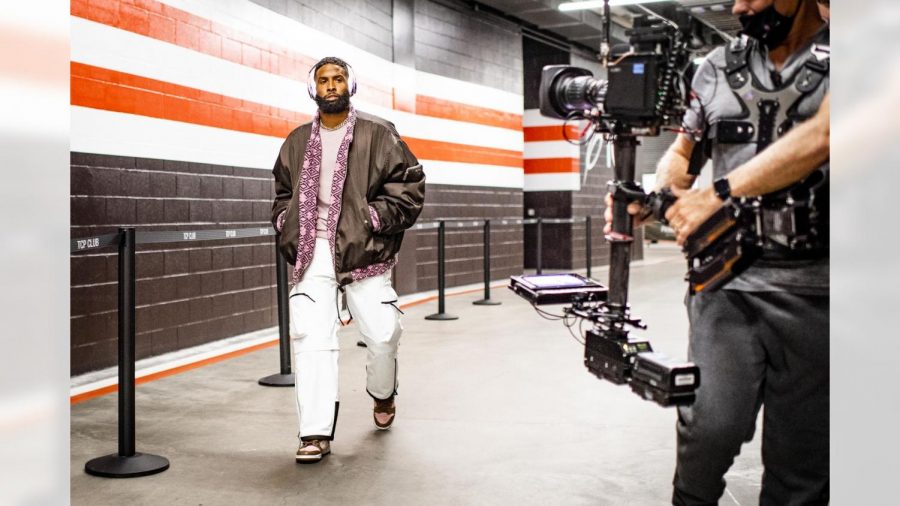 After a miserable start to this season, Odell Beckham, Jr. was released by the Browns today. Spanish teacher Jerry Turk said Beckham's performance has been "atrocious" this year. "All the drop passes and all the routes that he is running correctly and he has just underachieved in every way," Turk said.

Odell Beckham Jr. created a huge stir in the Browns community. Throughout his years here, Beckham had given himself a foolish reputation in the realm of NFL football. The Browns were absolutely right to cut him from the team.

The main reason the Browns were right to release Beckham was because of his underwhelming stats. According to RotoWire from CBSsports.com, “Beckham has struggled to connect with QB Baker Mayfield and has only 17 receptions for 232 yards and zero touchdowns through six games this season.”

Spanish teacher and devoted Browns fan Jerry Turk does not think highly of Beckham and sees his chemistry as the worst in the NFL. “I read a Tweet that a player said he is a complete loner and wants nothing to do with the other players and he is just terrible with chemistry in the locker room. His performance on the field is also ugly because he and Baker can just not get it together and is blaming him for his performance on the field,” he said.

After a strong 3-0 preseason, chemistry seemed good within the offense until Beckham was put on the field. Ben Axelrod of WKYC.com wrote, “The disconnect between Beckham and Mayfield has only been amplified in recent days after the three-time Pro Bowl wide receiver caught just one pass on one target for six yards in the Browns’ 15-10 loss to the Pittsburgh Steelers on Sunday.”

Senior football player Matthew Snider has watched Beckham’s performance compared to other wide receivers and knows that the Browns can draft or sign a better player than Beckham. He said, “Jarvis Landry has done so much more for this team. In terms of production, I like Rashard Higgins and Donovan Peoples-Jones as well as Jarvis Landry; I like them way better than him as a wide receiver, and our new [player] Anthony Schwartz that we drafted as well have done exceptionally better than Odell will ever do.”

Turk believes that for Beckham to have a successful future, he needs to mature and put in more time and effort. “[Beckham] needs to just be humble and act like he is still working for the big contract he already has, run his routes right, be a good team player, and do his best,” he said.

With that time and effort comes the actual ability to play the sport, which Snider believes Beckham can still do. Snider said, “I think [Beckham] needs to stop focusing on the big plays but more so be ready for the short plays and short yardages and being the person to take the double team and allowing the other receivers to get open because it spreads the defense and he will get open if they do that and will find success in short-yardage completions.”

Turk is glad to see Beckham on his way out of Cleveland and sees the Browns franchise thrive without him. He said, “The Browns tried to trade him but the teams in the league know that he is poisonous and is way overpaid and now he is in that hole that he can’t get out of. He will be an average to below-average receiver for the rest of his career.”