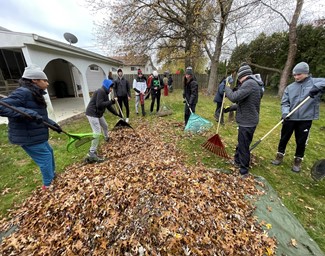 Interact club adviser Jerry Turk appreciated the way his club and NHS club members worked together to rake leaves in Mayfield Heights. "I loved seeing the kids have fun, they are serving the community. I saw older people cry with tears in their eyes and make me take cookies for the kids,” Turk said.

Interact club adviser Jerry Turk refers to this event as the “heavy premiere project of the year.” He said, “We had probably 75 students from our school this past Saturday morning come in and rake leaves for senior citizens and what better way to serve senior citizens [than] to help people that cannot help themselves?”

Turk teams up with the National Honors Society because of the efficiency both groups have. “NHS has some service requirements, so Mrs. [Jen] Hyland sees that this leaf-raking is of great value so we just combine our Interact club with NHS. These are two awesome groups with awesome students,” he said.

NHS president Mykenna Roy enjoyed the morning car ride most, bringing everyone to the houses in her car. She said, “Most people may overlook the underclassmen but after having lively conversations with five of them, I can say I made some awesome friends, and I’m so proud of how hard they worked during this event. I’ve said ‘hello’ to a few in the halls after Saturday, which makes me happy that we’ve connected from the leaf-raking event.

“Shoutout to Rhea Desphande, Kaylee Tsevdos, Francesca Diasio, Mario Daher, and Jack Bowling for being the coolest people to have car ride conversations with!” she said.

Turk cherishes the fact that this project heavily promotes leadership. “Every group had student leaders and drivers, so it’s directly related to the kids taking responsibility and being involved in something great,” he said.

New NHS member Kenza Mahdoui was happy that this new induction was able to give her the experience for a big community service project. She said, “It made me feel like I was playing a part in the community that I wouldn’t be able to do on a normal day.”

Roy liked how this project promoted critical thinking and collaboration in students. “This project required people to think outside of the box a few times, so kids were able to step up and lead a few others into working with their ideas. Communication was also important during this event, and people were able to take the lead on different ways of raking all the leaves together,” she said.

Mahdoui’s favorite part was how the community reacted to the group’s efforts. She said, “When the homeowners would show appreciation to the group and thank them for their service, it was a reminder of the good we are doing for the community.”

Through the act of community service, Turk appreciates the kindness this project spreads to make yards leaf-free. He said, “I just wanted to spark something in these kids that would recognize the importance of serving others and in my opinion the goal of education.”