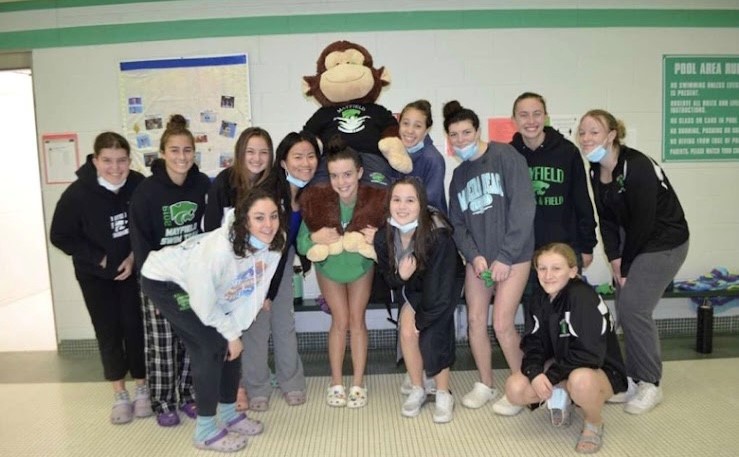 After a swim practice, the girls team gathers with their team's mascot.

After the COVID-19 pandemic made team sports unsafe for the majority of 2020, the swim team’s captains try to make the best of this season.

Seniors Victor Popoviciu, Anthony Ferrante, Lily Stenroos, and junior Emma Burkey were named co-captains which means they have more responsibilities than the other members. Stenroos said, “There are a few things that we do like plan events and that’s one of the main things. Another thing is telling everyone what we need to do, where we need to meet, what times practice is, and little maintenance things like that. ”

The team captains also help lead the members through warmups and practices according to senior Victor Popoviciu. He said, “These [practices] typically consist of sprints, endurance swims, and drills to better everyone with the occasional times where we work on our starts off the blocks.”

According to Stenroos, the swim team’s practice schedule is sporadic based on the day of the week, which is why one of her responsibilities as a captain is notifying members when practice is. She said, “We practice Monday-Saturday. Practices on the weekdays are from 3:15-5:30pm and [on] Saturday morning, it’s 7:45-10am which is horrible and sometimes we have morning practices but those are optional and they’re from 5:30-7am.”

Members of the swim team use these practices to get ready for larger competitions like Districts and Sectionals.

Sophomore Anna Sanelli has improved through the practices and even qualified for Districts last year. She said, “I just barely made [Districts], so this year, I’m hoping that I’ll have an easier time making it.”

In order to maintain positivity with the team’s rigorous schedule, the members create fun traditions throughout the season, according to Stenroos. She said, “The boys have a banana mascot and they kind of dance around it before meets, and this year, the girls got a monkey to go along with the banana.”

Popoviciu also mentioned that the boy’s swim team bleaches all of their hair during winter break. He said, “We usually bleach our hair in preparation before finally cutting most of it off for Sectionals. It’s been a tradition passed down for years, and we don’t want to see it end.”

After the COVID-19 pandemic taking away these traditions for many of the upperclassmen, Stenroos is excited that they were finally able to return. She said, “We weren’t allowed to do anything [my last two seasons]. It was just swimming – like we swam and went home. My freshman and sophomore year, we would have team sleepovers and team parties, and I’m so happy that we’re bringing it back this year.”

The swim team’s season ends a little differently for each member. Popoviciu said, “For some people, the season will end Feb. 12 after Sectionals, others will finish the 19th after Districts, and I’m hoping some people on the team will be able to qualify for the State competition on the 26th.

“Then to finish it off, we have a swim banquet in March where we receive rewards depending on our accomplishments throughout the season,” Popoviciu said.

On Dec. 3 and Dec. 4, the swim team competed against Kenston and Willoughby South winning both meets which Stenroos was surprised by because of the size of the team this season. She said, “There are a little less than 30 members and I know that kind of sounds like a lot, but when I was a freshman, there were a lot more people on the team.”

The swim team competes again this Saturday against Solon.