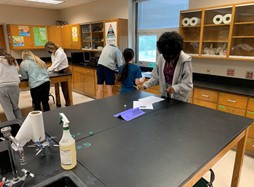 Because of the 90-minute block, students in AP Environmental Science have a longer period to complete labs.

Last year, when deciding on a schedule for the 2021-2022 school year, high school administrators decided to continue using the block schedule.

Assistant principal Jarrod Mulheman is one of the decision-makers on the school schedule and said the schedule for this school year had to be decided in Dec. 2020, when no one knew what the future would look like. Mulheman said, “We weren’t sure what the landscape was going to be like, if we were going to be mandated to even have school or be virtual.”

Principal Jeff Legan thought that consistency would be best for the students due to the circumstances regarding the pandemic, which is why he thought the block schedule would be best for a second year. Legan said, “Our seniors throughout the course of their high school career they’ve seen three different schedules.”

Although the decision to continue the block schedule was primarily continued for the lingering uncertainty of the 2021-2022 school year, Mulheman has said the block schedule has been beneficial for several reasons. He said, “Longer times for like science labs, being able to set up a lab and take it down all in one day, art classes extended time between projects, [physical education] units have been a lot better in some of those 90 minute times. It’s allowed our teachers to try out conferencing and conferring with kids one-on-one, in that time a lot of kids can get some of their work done in class rather than have homework.”

During the 2020-2021 school year, a large chunk of students were virtual for school. According to Mulheman, the biggest change with having the block schedule and the entire student body returning has been the lunch period. He said, “We had 40% fewer students here last year so lunch wasn’t as crowded as it is now. We weren’t able to use the cafeteria last year, so we had everyone eat in the classroom which was more manageable.”

The block schedule has caused controversy, as some students prefer the eight-period schedule compared to the block. However Mulheman believes in general, most students like the block. He said, “I think they like some other things that come along with the block like the release time and that extended time and being able to take breaks, sleeping in and starting at 8:10.”

Senior Kelvin Kwan has seen the eight-period schedule and the block schedule, so when he learned the block schedule would be returning for the 2021-2022 school year, he had neutral feelings about it. He said, “I didn’t like the hour and a half classes every day, but I don’t have to go to every class every day, so I’m kind of happy about that.”

Kwan thinks the block schedule has been beneficial this year. He said, “I got more time to study during the study halls and got more work done. It also benefited me in the classes because I got more time to finish work.”

In general, Mulheman believes that the block schedule has been very successful. He said, “We’ve reduced passing time and reduced the amount of content kids have to focus on each day.”

Even with the block schedule’s success, Legan has said the MHS schedule could change yet again for the 2022-2023 school year. Legan said, “I’ll tell you right now that there’s a group of teachers and students that are looking at the schedule to make a permanent change starting next year, So whatever schedule we push forward for next year, that’s gonna be it moving forward.”