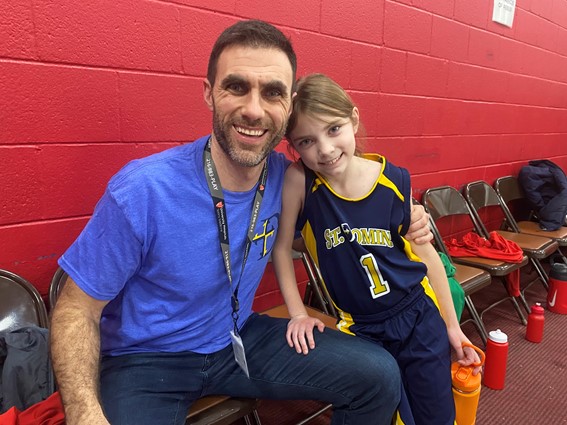 At a St. Dominic's basketball game, head coach Michael Verdi meets with his daughter Annabelle on the bench.

Since December 2021, Verdi has been teaching the third-grade team about different aspects of teamwork and the game of basketball. “There is something special about it because one of the kids I am coaching is my own. They will only be young for a little while longer,” Verdi said.

According to Verdi, coaching his daughter makes the job more complicated, but he loves the team. “I will admit, it’s difficult to be so hard on your own kid and coach them correctly when you know you’ll see them at dinnertime,” he said.

Verdi especially loves organizing team activities, such as team dinners after the games. He said, “[The players] are all so happy, and there is a lot of fun bonding time.”

Although Verdi has coached for several years, Paglio said this was a new adventure for his friend. “[Verdi] always told me after coaching high school and college kids, it’s hard to understand that it’s not competitive anymore. He says it’s all about learning teamwork and dynamics,” Paglio said.

The new adventure has been something Verdi admits he’s enjoyed. He said, “The best part about coaching a team that is so much younger than I’m used to is that I can see them in a different light and meet more kids my daughter’s age and have fun with them.”