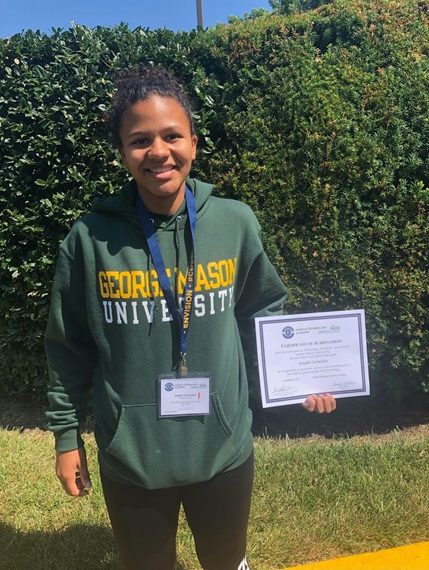 Kaylie Cornelius, who was recently named the Mayfield High School student of the month, is excited to find a college that fits her interests and goals. She said, "I think that’s going to be really fun and kinda just living my own life and being some form of an adult, just getting out there and being who I want to be."

Cornelius has visited many colleges in the past year, to find what she wanted from a college. She said, “Cornell was my favorite, for sure, [as] it was just a beautiful campus. It was a beautiful city, and I liked the atmosphere and the environment. It definitely seemed like a place you could feel homey, and I just liked the overall vibe of the campus.”

She has toured and researched multiple college campuses, to see if their mechanical engineering programs suited her. She said, “For a college, it had to have a mechanical engineering major, otherwise I would have never applied. For the programs, I was looking for high rankings and had research opportunities. I think hands-on is the best way I learn, so colleges that had good research programs and volunteer organizations where I could really get involved were probably some of the best I applied to, and that was definitely some of the reasons I wanted to apply to them.”

Beginning in sixth grade, classes have taught Cornelius that she discovered she could make a career out of her hobbies. She said, “The PLTW (Project Lead the Way), STEM courses offered at the innovation center have definitely been a major component of why I discovered this to be what I want to do. But also just the math classes and math and science teachers that have been super helpful and encouraging, have really upheld my love for the maths and sciences and I think that it really solidified my want to go into that sort of field.”

Cornelius’s grandmother, Karen, believes she has grown up loving to build and create. She said, “Her great-grandpa had her helping with things involving engineering when she was younger that I wouldn’t even know about but she always loved it. As technology advanced, the things she liked to work on advanced with it, and for anything mechanical or technical we always went to her for help with it.”

Cornelius has spent most of her life wanting to become a mechanical engineer, her family and childhood played a large role in influencing this decision. Cornelius said, “When I was a kid, my great-grandpa used to build remote control airplanes and fly them. He used to fix bikes and cars, and I would always help him.”

Cornelius’ love for science and math began at a young age and continued throughout high school. “I think my favorite class has always been math since I was young, but I think I’d say probably STEM principles of engineering was my favorite. But outside of that I also love my physics classes, and AP physics 1 was hard and super challenging but I enjoyed it.”

She was excited to have the opportunity to become an engineer and looks forward to her future job. Cornelius said, “I think the fact that I have always known that I wanted to find a job that I would wake up in the morning and be excited to go to work, rather than it being some chore and something that is upsetting so after realizing that engineering made me happy that motivation to succeed really kept going because I knew I found something that I would be happy doing.”

She looks forward to her future in college, to be more independent and find people that share her interests. Cornelius said, “I think getting out and seeing new things is going to be exciting, and meeting new people, and meeting people who are like-minded and who enjoy engineering as much as I do.”