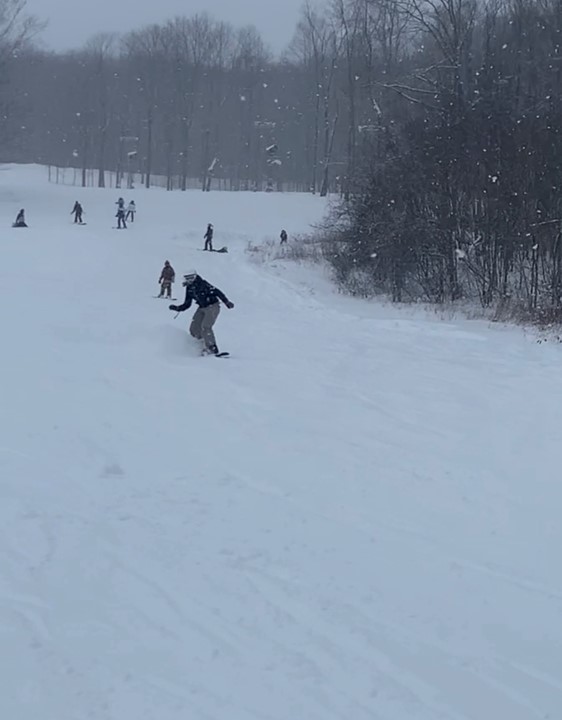 On a snowy January day, sophomore Elenore Bausone snowboards at Alpine Valley. She said, "My goals in the future are to definitely improve. I want to be able to go down any hill that I try, both at Brandywine and at Alpine."

Bausone took on this journey as a personal interest. She said, “It seemed really cool, and it sounds cooler if you say that you’re snowboarding instead of skiing.”

Wanting to try the sport for a while, Bausone finally caved to its appeal. She said, “I had stuck with skiing in seventh and eighth grade, and I like skiing too, but I’ve always wanted to at least try it once.”

Bausone made sure to pay attention to her progress and achievements as she went on. She said, “It was exciting to make improvements and notice it as I went on.”

She has been able to perform better and be more assured while snowboarding. She said, “I’ve definitely gotten better about going down the hill and falling less. I think I’ve improved at stopping and turning, but I’m not quite there yet.

Bausone traveled to Alpine Valley for her snowboarding trips over times weekends in January. She said, “The slopes were pretty good, I liked them, [as] they’re not terribly steep, but it was still fun and had lots of bumps.”

Bausone’s brother, Salvatore, is an experienced snowboarder and has been impressed by his sister’s quick progress. He said, “She’s improved a lot. She’s only gone twice but she’s already progressed a lot and she can go down the hill without falling.”

Salvatore has accompanied his sister each time she has gone to Alpine Valley, and she’s appreciated his help. Bausone said, “He was really supportive of me the whole time I was snowboarding.”

Noting his sister’s improvements and cheering her on, Salvatore encourages her through this voyage. He said, “I think she could do really good and could have a lot of potential to get a lot better.”

Bausone is pleased overall with trying something new and seeing how well she can do at it. She said, “I think it was really just the excitement of trying something new. I mean there are just so many new things that you can do that aren’t different from your day-to-day lives.”