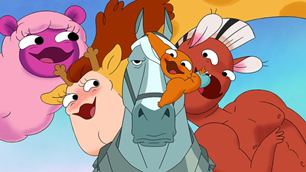 When I first saw mention of “Centaurworld,” about a month ago, I brushed it off. It looked ridiculous. Bright colors, overly-cutesy designs, and names like “Wammawink” and “Durpleton”? Yeah, no thanks! I’m 18 years old, not 8. I don’t need to be told how to share and apologize after hurting someone’s feelings.

So, when I started watching season 1 recently, I went in with the expectation that I would just doze off and have to find a different show to watch. After all, it was just a kids show about centaurs and friendship, right?

Oh, how wrong I was.

Season 1 of “Centaurworld” on Netflix is a show that masterfully satirizes campy “power of friendship” stories, while beautifully handling themes of war and PTSD.

“Centaurworld” follows a war horse, played by Kimiko Glenn and appropriately named “Horse,” as she’s transported into a magical world totally unlike anything she’s ever seen before. While Horse’s own world is war-torn and post-apocalyptic, this new world is bright, happy, and the epitome of the phrase “the magic of friendship.” In fact, the residents are actually magical!

The main residents of this world that Horse interacts with is a small herd of centaurs: Wammawink, Zulius, Ched, Glendale, and Durpleton. Each of these characters are unique, with strong personalities and amazing voices that manage to blend together seamlessly. They really feel like a family- like a herd!

Plot-wise, the show is rather simple: Horse needs to get back to her own world and return to her Rider. Sometimes, a plot as simple as this can be a real detriment to a show, but that’s not the case in Centaurworld. In Centaurworld, the plot is driven by complex and unique characters, making up for a simplistic plot.

Junior Lizzie Wurm also thought the plot was simple, but still fun. She said, “It’s a show that didn’t take itself too seriously, but it was a good storyline at the end of the day. Because again, it was very child-esque. It gave me a lot of nostalgia when it came to my childhood because it was a cartoon I could watch that was almost like it grew with me.”

Though the plot is simple, the issues touched upon in “Centaurworld” are anything but simple. Many times throughout the show, characters’ PTSD and reactions to those past traumas are shown clearly.

One example of this comes in episode 4, “What You Need,” when Wammawink, played by Megan Hilty, is shown to be incredibly shaken and even paralyzed by the location of her former village. Her reaction is strong, and it is clearly explained why the reaction is so strong later in the episode.

Now, if you were surprised by the fact that PTSD is touched on in this show, you wouldn’t be the only one. “Centaurworld” is a master of subverting expectations, presenting itself as a cutesy kids’ show and nothing more.

This satire is done incredibly well, and emphasizes that while friendship is not exactly magic, sometimes positivity can help make a situation better. However, sometimes they go a bit too far with childish jokes, and it can get a tad tiring.

Keeping with the theme of campy kids’ shows, “Centaurworld” features at least three original songs in every episode. For the most part, these songs are incredibly well-made, and I’ve found myself going back to listen to my favorites on more than one occasion. I felt some of the songs might’ve missed the mark a bit, but the few “meh” songs are greatly overshadowed by the amazing ones.

When asked about the music in Centaurworld, Wurm had a simple and short answer. “12/10. Absolutely fantastic. Love it. Amazing. You can’t beat it, honestly,” she said.

In the end, “Centaurworld” is an outstanding mix of cute, loveable characters, important topics, and fun situations and animation. I think anyone of any age could find something to enjoy in this show, and for that reason, I give it a full 4 out of 4 magical, glittery horseshoes!
Centaurworld, Season 1
10 episodes, ~28 minutes each
Starring Kimiko Glenn and Megan Hilty
Created by Megan Nicole Dong
Produced by Louis J. Cuck
Rated TV-Y7, with some frightening and intense scenes
Animated Comedy Adventure
This show was based on the creator’s own emotional experiences in regards to heavy expectations.
100% on Rotten Tomatoes
4/4 magical, glittery horseshoes