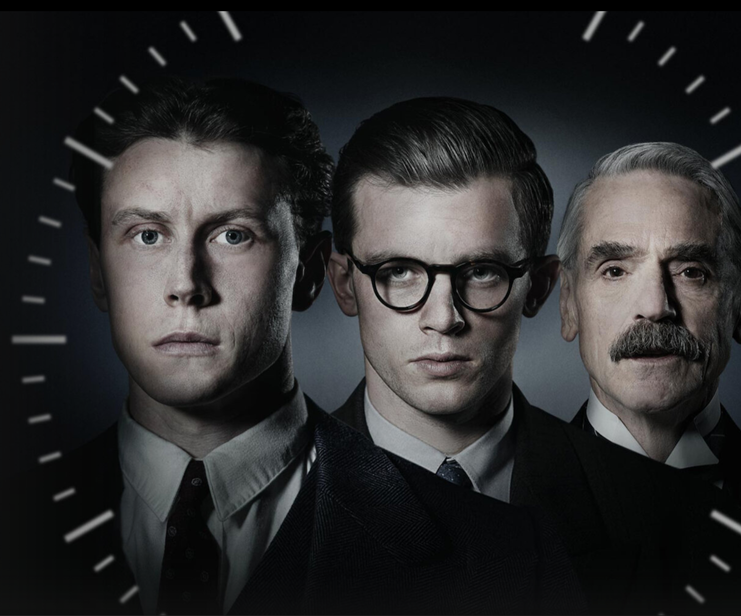 That’s how much time I completely wasted watching the Netflix original, “Munich: The Edge of War”, and trust me, I could feel every second drag on.

“Munich: The Edge of War” follows the character Hugh Legat, played by George Mackay, and his experiences being Neville Chamberlain’s secretary the year before WWII broke out. The British Government partakes in a last-ditch effort to prevent the Nazis from conquering the Sudentenland, and Hugh finds himself with the sole key to unraveling Hitler’s maniacal plot: A classified document, revealing all of Hitler’s plans to conquer Europe.

As figures from his past come back to haunt him, and the war looms ever nearer, Hugh must make a choice that will impact millions. But the question is, will it be enough to stop the Nazis?

Although many plot points were attention-grabbing and impactful, it was nearly impossible to stay focused on the movie with the appalling camera-work. The shots were unfocused, shaky, and placed horribly. Before starting to watch new scenes I had to pause the movie just to decipher where the characters were.

Junior Jack Miller agreed that the camera-work seemed unprofessional. He said, “It just made trying to understand what was going on so much harder.”

The acting throughout the movie was stale and awkward as well, making the movie feel monotonous. One scene that particularly stood out to me was the opening. The acting is downright terrible. Their lines are flat and monotone, and there is no emotion in the scene whatsoever.

The actor for Hugh Legat, George Mackay, severely disappointed in his role. Known for his acting In “Peter Pan” as Peter Ppan, “Ophelia” as Hamlet, “1917” as Lance Corporal William, and many more famous movies, “Munich: The Edge of War” is a massive downgrade from his previous roles.

Jannis Niewöhner, an up-and-coming German actor, played Paul von Hartmann and breathed life into this movie like no other role. Whenever he was on screen, the emotions he was portraying could be felt vividly. His character was Hugh’s estranged best friend, and his passion for the movie could be felt through the effort he put into his role.

Jeremey Irons co-stars as the Prime Minister of Britain, Neville Chamberlain. He presents Chamberlain as a kind and confident man, who continuously gets more and more stressed and cold throughout the movie. Overall though, there was nothing very noteworthy about how he played his role.

Miller was also disappointed and struggled to understand the movie. He said, “The two main characters looked similar and it really threw me off.”

One movie that “Munich: the Edge of War” reminded me of was “The Imitation Game”, following a similar race against the clock, but it takes place during WWII, instead of before. It showcases Alan Turing, a genius coder, as he develops a machine to break the Nazi’s cipher that they use to communicate with each other. This movie is high-stakes, and the tension can be felt throughout the film, the acting was superb.

Overall, “The Imitation Game” was a thrilling and fast-paced film that kept viewers at the edge of their seats, while “Munich: the Edge of War” dragged on for hours, meandering towards an unclear climax that left viewers bored and disappointed.

If “Munich: the Edge of War had more exposition, and more clearly stated what the plot was, it would have made the movie immensely easier to understand and would have made it much more interesting to watch.

I give “Munich: The Edge of War” 2 out of 5 classified documents, for the poor camera-work, worse acting, and a difficult to comprehend plot.
Munich: The Edge of War
123 Minutes
Starring George Mackay and Jannis Niewöhner
Directed by Christian Schwochow
Produced by Andrew Eaton
Rated PG-13 for strong language, smoking, thematic elements, and brief violence.
The characters Hugh Legat and Paul von Hartmann are partially inspired by the diplomat Adam von Trott zu Solz and the scholar AL Rowse.
Historical Drama
6.9/10 on ImDb
Two out of five classified documents