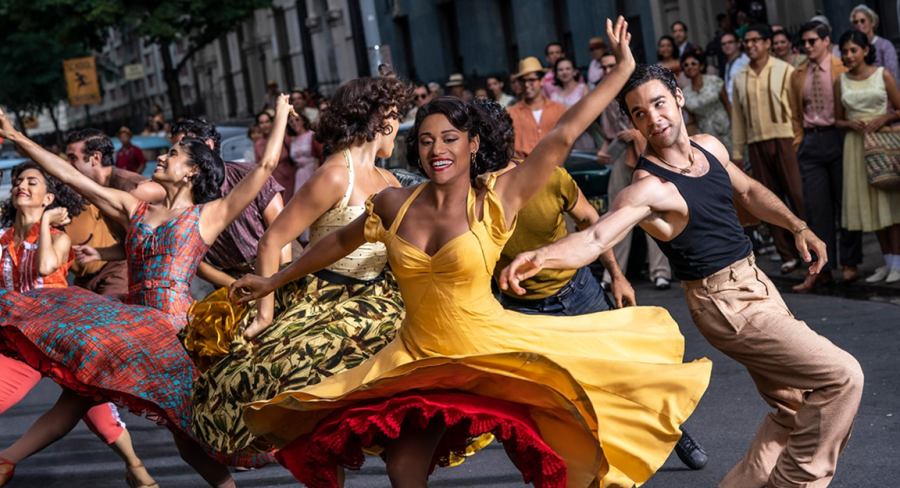 Boys and girls were draped in dazzling vibrant hues of yellow and red dresses, suits, and shoes. Cheerfully clapping and twirling in utter unison, the dancers made their way through the streets of New York City. All generations of Puerto Rican Americans filled the streets, singing the infamous tune “America” from the original “West Side Story.”

“West Side Story” displays a ravishing rendition of the original through its combination of dazzling dancing, splendid singing, exquisite acting and so much more.

Undoubtedly, the songs and dances could put a smile on anyone’s face. As upbeat and fantastic foot-tapping tunes, the soundtrack and choreography never missed a beat or a chance to shine.

One song in particular, “America,” possessed an optimism mixed with oxymoronic lyrics that created a beautiful contrast. The lyrics highlighted the contradictory nature of America known as the “Promised Land.” With a hopeful attitude, the amazing ensemble rejoiced hand in hand leaving a smile on the faces of the audience.

Junior Casper Dombrosky recently viewed “West Side Story,” and thought Arina DeBose portrayed her character Maria in the most real way. He said, “She had to deal with them [stresses and conflicts] constantly throughout the movie and we saw that. You could see when she was stressed out and we could see how a bunch of the different scenes impacted her in different ways.”

The chemistry between the two main characters, Maria and Tony (portrayed by Ansel Elgort and Rachel Zegler, respectively), was remarkably real. Through intense eye contact, sparkling smiles, and adorable laughter, the audience could be easily entranced by their undeniable love for each other.

One brilliant scene from the two included a secret meet-up behind the gym bleachers during the school dance. While the two were different races, their desire to dance with each other outweighed the racial divide of the 1950s. They began to dance, eyes mesmerized by the others, twirling around each other without touching.

In conjunction with today’s progressive nature, the movie explored and exposed the realities for Puerto Ricans living in America during the 50s. Injustices, privileges, and preferential treatment toward the white Americans were shown.

During the school dance, the white and Puerto Rican students stationed themselves on different sides, police officers ready in case of a fight. One police officer specifically checked the drink of a Puerto Rican girl but not the drinks of the other white girls nearby. Sprinkled into the plot, microaggressions added crucial learning moments for the audience.

However, Dombrosky felt that while some songs and dances complemented the plot, some distracted from the conflict. He said, “I would say [during] the scene on the pier when the jets were fighting, it really took away from the impact and seriousness of the scene by changing it into a dance number.”

Focusing more on the acting rather than the musical elements during serious scenes might create more authentic interactions.

Even in musical form, the plot followed very similarly to the infamous play, “Romeo and Juliet.” Ferocious fights. Two rival sides. Forbidden love. Prejudice and bias. Violence and death. However, the ending did not conclude with the typical two deaths of the love interests, leaving the audience stunned.

Overall, I would rate this movie 4.5 out of 5 music notes. While the music sometimes counteracts the gravity of the plot, this movie offers amazing entertainment through catchy songs, synchronized dances, and an unexpected plot. Anyone looking for a miraculous modern twist on the classic romantic trope will enjoy every second of “West Side Story.”