When one door opens… the rest of them close? 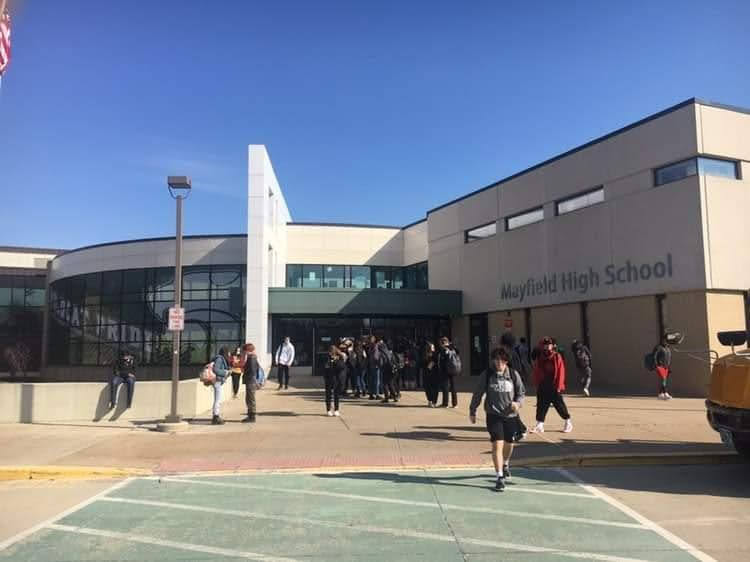 Assistant principal Jarrod Mulheman believes it might feel like there are more kids being tardy because of the process of check-ins at the main entrance. “They have to come in and check with Miss Spiccia, so there is a funnel of students coming through the office rather than just going to class,” he said.

24 doors. That’s the number of exit doors Mayfield High School has within their building.

Yet if you’re trying to get into the building, that number of available options goes down… all the way back to one.

Principal Jeff Legan is hesitant to open more doors to the high school in the morning as there are too many ways other people could slip in. “My number one job is the safety and security of all kids. Second to that is providing the highest quality education,” he said.

Legan and the rest of administration assigns paraprofessionals to multiple places like the main entrance in the building considered to be high traffic areas. He said, “The front door is one of the most important safety places that we know we have to monitor on a daily basis.”

Assistant principal Jarrod Mulheman says the traffic flow coming through only one place is structured to monitor who comes in and out of the building. He said, “There’s [even] a different entrance for visitors… So anyone who doesn’t work here that is an adult that comes in has to use our Raptor scanning system. You put your driver’s license through it, and it does a background check on you.”

Senior Megan Linsky thinks more doors should be open, but with the right precautions put in place. She said, “They should have a staff member at the doors, though, so that there is someone supervising the people who come in.”

Legan believes that opening more doors does have the potential to reduce tardiness, but not without a cost. “If I open that up and it reduces more tardies… does it become more of a safety risk? [And] that would mean that I need someone there to supervise it and, again, I need to maximize my staff as well,” he said.

Mulheman also believes that opening more doors in the morning does have the potential to reduce tardiness. “But I also think that there is a responsibility of students to know how much time it takes to get here and get to class. And so, at the cost of the security, I would say that I disagree with doing that,” he said.

Legan began enforcing a harsher tardy system as by the state, students need to be in class for a specific number of hours. He said, “If you think about the course of a year, there’s 173 days in a school year. So, if a student is three minutes late, you multiply that over 173 days, and that is a huge loss of their education.

“We just want to make sure that we are maximizing a student’s potential,” Legan said.

Linsky isn’t frustrated about only one main entrance being open, but the same can’t be said for her friends who complain to her. “I think it’s because it causes a lot of foot traffic in the morning and people end up late because everyone’s trying to get their foot in that door,” Linsky said.

Mulheman is sure that Mayfield is going to take every measure to ensure a safe and secure campus. He said, “One of the things that I love about Mayfield is that we adapt to that changing data. I think that the district has done a nice job throughout all of this using that scientific data to make informed decisions,” Mulheman said.

In th future, Legan is open-minded to opening up more entrances at the high school. “It would just have to be something that I would work out with my admin team. And really, I would like to get feedback from my student advisory committee, as well,” he said.