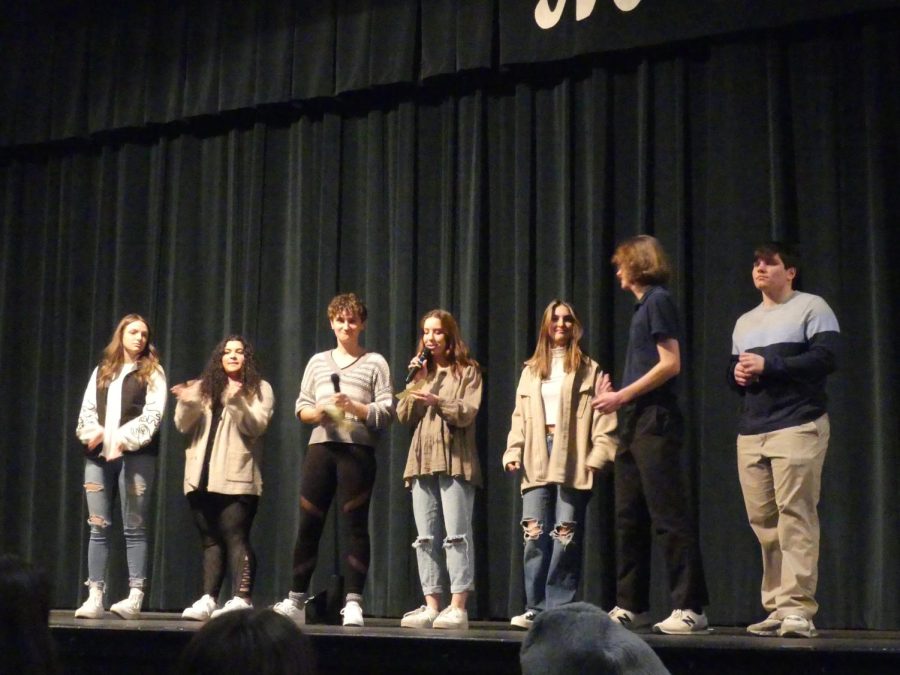 The Paw Print’s Sarah Carlile sat down with senior class co-adviser Melissa Fini-Sanson to discuss the talent show that was held on Friday, March 4.

Sarah: I saw the talent show was a hit! What kind of prep went into making such an awesome show possible?

Fini-Sanson: Thank you! So, we had sign-ups for an audition process for students who wanted to participate in the show, which was spread throughout those first few weeks of January. Then we also had two rehearsals in February, a soundcheck the night of, and then the show itself.

Sarah: That’s great! What kind of role did you play in terms of supervising the show?

Fini-Sanson: So, the senior class was mostly in charge of running the actual event, which includes picking the show theme (they chose to reenact America’s Got Talent for this year’s), hyping it up to students to participate (both as talent acts and event volunteers) and to get people to come see it, and they were tasked with getting local business sponsors. As for Mr. Torda and I, we really just structured the event in terms of planning, the show’s program, and just really oversaw the whole operation. We also were in charge of the financial back-end of it.

Sarah: Sounds like a lot of hard work! What would you say made this year’s talent show special in comparison to other years?

Fini-Sanson: Well, we haven’t actually had the opportunity to have a talent show since 2020 due to COVID. So honestly, just being able to put it on and have some fun made it really special.

Sarah: Yeah, absolutely! What has been your favorite part about running the show every year?

Fini-Sanson: Pretty much when it all comes together and everything just works out so well at the end. The pay-off is such a rewarding feeling. Also seeing these kids being so courageous and confident enough to be able to express themselves on stage in front of a bunch of people.

Sarah: It’s definitely an amazing sight to see! Speaking of pay-off, though, I noticed this year we didn’t have a voted-on “winner” of the show. Why did you decide not to have a voting/ranking system and do you think it was better or worse for the show in the end?

Fini-Sanson: Honestly, I personally have never liked the fact that we’ve done that. I don’t like pinning one, specific winner because I truly believe everyone who is gutsy enough to step out onto that stage is a winner. It has always felt a tad bit rushed and disorganized, as well, in the way we would do it, so it just seemed simpler to take it out.

Sarah: I’d definitely agree with that! As someone who was one of the performers, I know how nerve-wracking it is to go out there and then compare yourself to everyone else who also performed; so I can only imagine having the contest element to it would have made it more intense anxiety-wise for the talent.

Fini-Sanson: Absolutely! Mr. Torda and I also just really wanted to put our own thumbprint on the show and we felt that a winner was not conducive to the event and what we wanted the show to represent.

Fini-Sanson: I want to say first and foremost, the weaker points have nothing to do with any of our students. Everyone did great in that regard. However, we did have technical difficulties with aspects of the show, like the spotlight, for example. Due to the construction of the school, we weren’t really able to move the spotlight level. It was super bright, things like that. We just had to go with what we had, even if it wasn’t exactly what our vision for the show was. Some of the best parts, though, I think were how some of the students were able to incorporate videos or visuals with their act, which was super cool to see. It was also just very refreshing to have a variety of acts that were not just singing because in the past we have had cases like that.

Sarah: For sure! I did notice the diversity of the different acts, and I know for sure that was something I appreciated most about the show. What did you think about the audience turnout for the show?

Fini-Sanson: It was definitely a lot less than what we had anticipated or what we had wanted. We just didn’t have the crowd we thought we would, but I’d still say we did well.

Sarah: I can understand that! For what it’s worth, us students (specifically the performers) thought it was going to be a lot less crowded than it was, so for us, it felt huge!

Fini-Sanson: Yeah, well, two days before the event, actually, we had only sold 24 tickets. So considering the night of the show we had about 130 people, I’d definitely say we did pretty good.

Sarah: That’s awesome! What was the senior class’ fundraising goal and were they able to meet it?

Fini-Sanson: So we didn’t have a specific-set goal or anything like that. We had just wanted to raise a decent amount of money to go towards the end-of-year scholarships as well as off-set senior banquet and the senior class gift to the school.

Sarah: That’s nice, though! I mean, that way you all knew you wanted to raise money but without the pressure of a target number or the possible disappointment of not meeting that. In regards to the future, what would you say to students on why they should come to or participate in school events like the talent show?

Fini-Sanson: Students just have such a diverse amount of talent and we have some really cool kids who can do amazing things that you would have never known they could do, if not for events like the talent show. It’s also just a lovely opportunity to be able to have an event like this that incorporates everyone who wants to be included.

Sarah: For sure! I definitely would have never guessed some of the things my fellow classmates could do, so it was definitely super cool to see! As for my final question for you, what other school events brought on by student council should students be looking out for in the near future?

Fini-Sanson: For seniors, we have the senior banquet, the class shirts, and senior picnic. As for everyone, we have the Rainbow Run coming up soon, which is open to the school and community.

Sarah: All good things! Thank you so much for your time. I really appreciated getting the chance to sit down and talk with you!