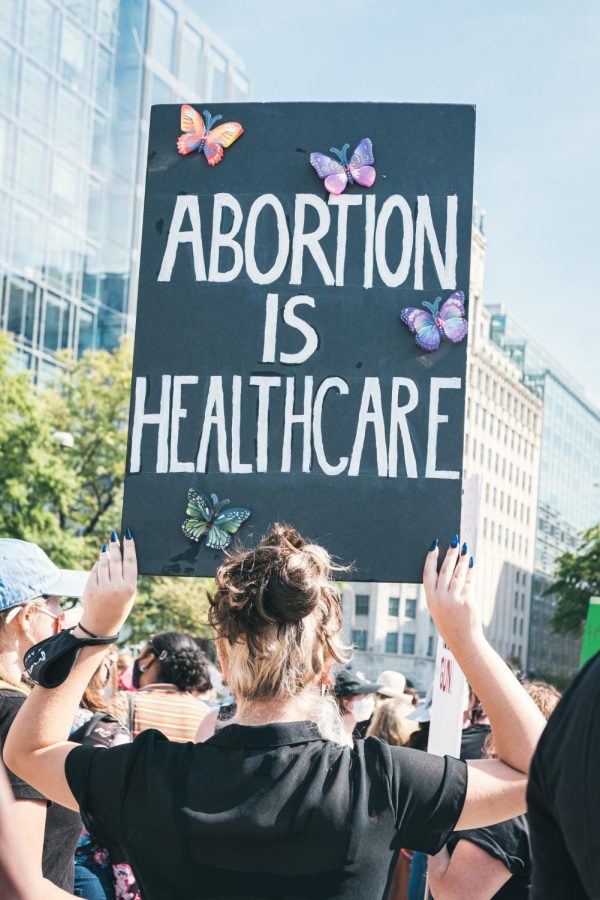 People around the country are taking notice of the legal battles in Texas over abortion rights. Junior Katie Cohen opposes the six-week abortion ban and said, "Reproductive rights protect a woman’s right to choose anything about her body (like her health care)... and that should be something that’s fully the woman’s right like she should have the choice if she wants a human growing inside her or not... She shouldn't be forced to carry out anything that she doesn't want to."

85-90% of the women who have abortions are six weeks or more into their first trimester.

The six-week abortion ban in Texas must be removed as it restricts many pregnant women from having enough time to exercise their constitutional right to abortion.

The overarching problem here is that there is simply not enough time for many women to have an abortion in six weeks. In fact, according to Planned Parenthood, “[It takes] two weeks to make a decision, find child care, take off work, find the money to pay for the procedure, and deal with the other laws in Texas that are designed to shame you and delay your care, like a mandatory 24 hour waiting period for most people and a requirement that all patients receive state-mandated counseling and ultrasound.”

Michael Verdi is an AP Biology, Biology, and Anatomy & Physiology teacher who understands the controversial nature of the topic and chooses to spread accurate information for people to make their own informed opinions.

Verdi noted that the hormone HCG is released as an indicator for pregnancy which is what a pregnancy test picks up; however, it takes some time to show up. He said, “Some girls might not even think to test for pregnancy. Say they’re on birth control, they miss one day, they got pregnant and they just weren’t expecting to, and maybe they have irregular periods, so they don’t quite know when to check.”

Verdi says that every pregnancy and every first trimester are different. The signs are tricky to read when they vary depending on woman, kid, or the number of pregnancies. He said, “My wife had one [pregnancy] where she was really, really, sick right about when she was supposed to have her period, and then she had another one when where she was barely sick at all.”

Junior Katie Cohen is passionate about the issue. In middle school, she attended a women’s march in downtown Cleveland with her friends and their mothers to express her support for women’s rights.

Cohen is infuriated by the six-week ban and sympathizes with the women in Texas. She said, “[it’s frustrating] for there to be punishment for just not knowing because women skip periods all the time. It’s a super common thing and it makes it really hard to identify when you’re actually pregnant or not.”

The new abortion law has no exceptions for rape and incest victims, making it extremely difficult for victims to receive the physical and psychological justice that they deserve. NPR shared the stance of the director of the Institute for Child and Family Wellbeing at the University of Texas at Austin. Faulkner said, “‘The impact of finally coming forward and then being told there are no options for you is devastating.’”

NPR found a study that concluded that around 3 million women have become pregnant in the United States because of rape. How might these individuals heal when abortion might not even be an option?

Not to mention, Texas already made it difficult for minority groups and now it worsens this discrimination based on race, class, and disability. According to the American Civil Liberties Union, “It was already difficult to access abortion as a Texan, especially for people with low incomes, Black women, Indigenous folks, people of color, undocumented folks, our queer and trans communities, disabled people, and youth.”

Now, Texas targets more than just the women having abortions. The six-week ban also threatens people who assist or even try to assist a woman’s needs for an abortion. According to NPR, “Under the law, any private citizen is entitled to collect $10,000 or more if they bring a successful lawsuit against someone who performed or helped a woman obtain an abortion after the limit — which opponents have condemned as a bounty.”

Furthermore, this law will contribute to drastic economic effects on women. When access to abortion is slim to none, it can lead to greater financial burdens for them. According to Anneken Tappe from CNN, “Not being able to terminate an unwanted pregnancy increases the amount of debt past due for 30 days or more by 78%.”

Verdi claimed that not all people are in the right financial situation to afford pregnancy tests whenever they need one. For instance, while he and his wife still bought a test after a trip to CVS, he was in a similar dilemma. He said, “[The pregnancy test] was a $20 test, [so] we almost walked out of CVS and said ‘let’s just wait another week [because] that’s kind of expensive’.”

From a societal standpoint, Kate Bahn, interim chief economist at the Washington Center for Equitable Growth believes that a healthy economy stems from equal opportunities. Women must have the right to their bodies to positively contribute to the economy. Bahn told CNN, “And if half the population doesn’t have the freedom of that choice, it affects the dynamism of the labor market.”

Cohen sees that the reasons against pro-choice ideals usually stem from religious beliefs or a lack of information. She has a message for anyone willing to listen. Cohen said, “Have more of an open mind and don’t let your own religious beliefs affect others and their regulation of their body.”

Ultimately, this ban will cut away a massive part of women’s right to choose, will discriminate against many disadvantaged but innocent individuals, and will eat away at the chance for women to gain economic opportunities for prosperity. The Texas abortion ban is here and many more bans are around the corner. We must protest and command that this law be eliminated and push for the justice, equality, and freedom that women deserve right now!