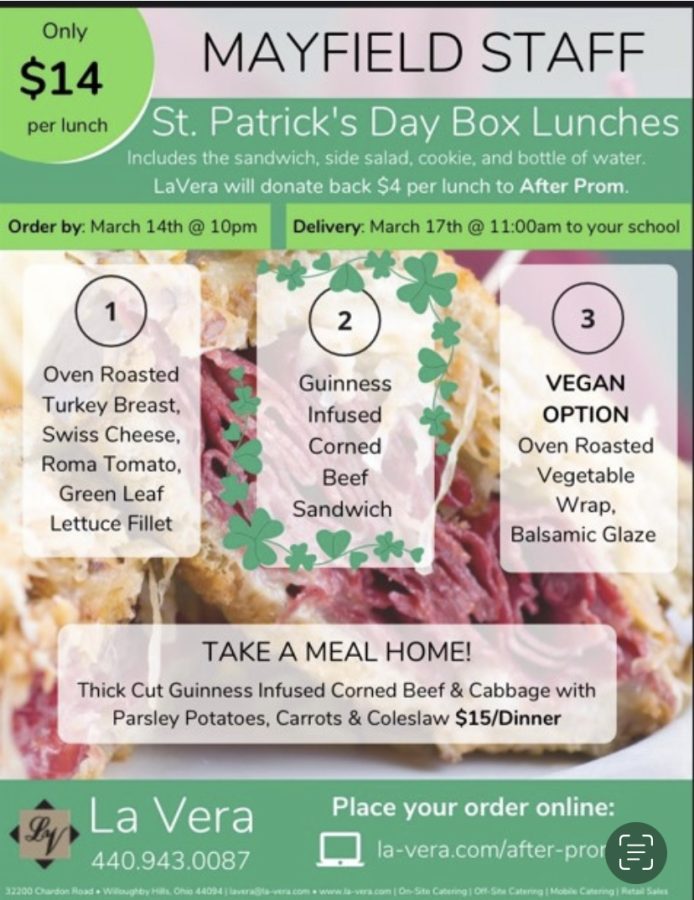 The St. Patrick's Day boxed lunches will be delivered to the school staff on Thursday. After Prom committee president Diane Snider is excited by this fundraiser and said this will allow them to help subsidize the cost of After Prom for students. She said, "We will give the nicest After Prom we can do with whatever funding we end up getting."

With Prom approaching on May 7, the After Prom committee is pleased they can host a fundraiser this week for St. Patrick’s Day.

Through a partnership with LaVera Party Center, the After Prom committee is offering a St. Patrick’s Day boxed lunch for the high school staff this Thursday. For $14, staff can choose a turkey and swiss sandwich, a corned beef sandwich, or a veggie wrap that will be delivered to the school. Every lunch purchase will raise $4 for After Prom.

After Prom committee president Diane Snider said the group is especially grateful for principal Jeff Legan’s willingness to approve the fundraiser. She said, “The school is super, super, super supportive. Mr. Legan has been amazing and has worked to help us.”

Because of the pandemic, Snider said it’s been difficult for After Prom to fundraise like they’ve done in the past. Snider said, “Normally we try and have one big [fundraiser] once a year, and then we try and go out for donations from different restaurants and businesses in the city, but they are struggling too right now.”

After Prom committee secretary Michelle Bremec says the group’s annual fundraiser is called A Night at the Races, and they were hoping to have it this past fall. She said, “COVID spiked again and we didn’t feel comfortable having it.”

For this reason, Bremec is grateful they can host the St. Patrick’s Day boxed lunches this week to generate revenue. She said, “We are not where we would necessarily be before COVID… We managed to have an After Prom last year, and we are going to have it again this year.”

According to Snider, After Prom ticket prices will not be affected by the group’s financial strain. “It’s hard enough for kids to afford Prom and then After Prom, so if we can do what we had done last year in an affordable way, [our plan is to] get the best price possible at the venue we are going to,” Snider said.

No matter what the financial situation is, the goal of the After Prom committee remains the same. Snider said, “One of the things is that we want to keep kids busy that night and involved. We want to keep them off the streets after Prom – that’s the whole reason.”

The committee is still choosing between venues to host the event. Once that’s determined, students will be able to purchase tickets in the Infinite Campus student store.