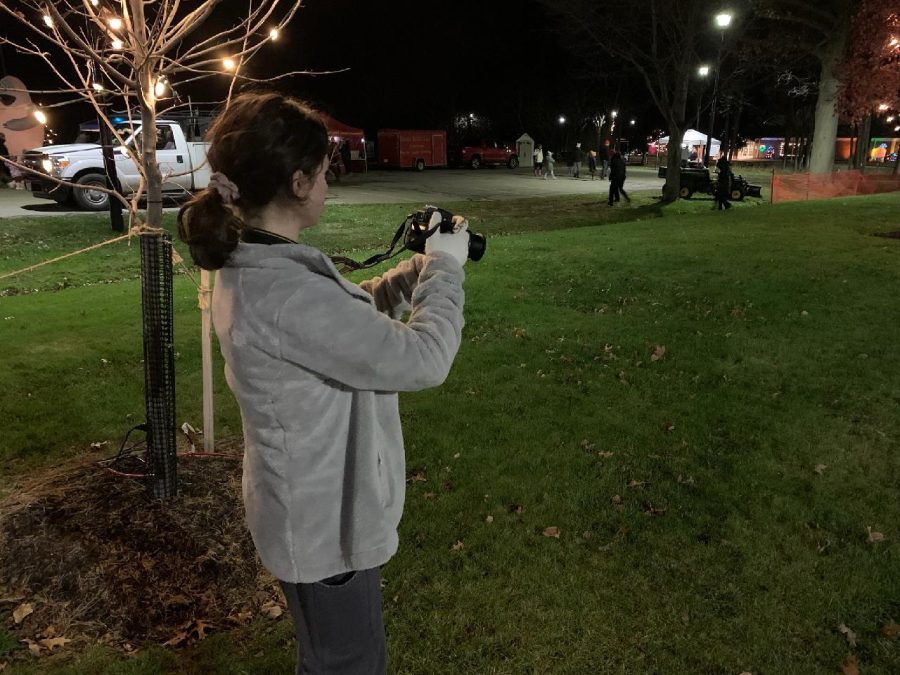 When senior Gabi Polin feels stressed about her fourth quarter classes and responsibilities, her outlet is photography. She said, "I completely understand why people struggle at the end of the year, especially because I struggle a lot too. For seniors in particular, it can be really hard to find the motivation to continue putting in the same quality of work as you have been for the past year, and it's so tempting to just sit back and ignore assignments since most of us are already accepted into college."

With just four more weeks of classes left for seniors, a new highly infectious disease is rapidly spreading through the halls, and for the first time in two years, it’s not COVID-19.

Student council president Mykenna Roy believes the hardest part of the fourth quarter for seniors is simply having the motivation to get things done. She said, “Whether it’s completing assignments to a specific degree of quality or arriving to class on time in the morning, it’s just incredibly frustrating to put so much effort into things anymore.
“We’re tired, burnt out, and in desperate need of the summer to come as fast as it can,” Roy said.
Roy said the overwhelming amount of deadlines during this time can also be a struggle point for seniors. She said, “[It] can instill a lot of anxiety in some people because it’s so much for our tired brains to process.”

Senior Gabi Polin believes the hardest part of the fourth quarter for her is keeping everything in order. She said, “I’m taking five AP classes and all of them are reviewing at different paces and assigning different levels of homework, and some of them expect me to be able to focus solely on their class when I have to allocate my time between five.

“Every once in a while, I’ll forget one assignment and check my grades and suddenly I’ve dropped 40%,” Polin said.

Polin also thinks that while motivation to finish is a struggle for seniors, it’s also a challenge to maintain their work quality. “It’s so tempting to just sit back and ignore assignments since most of us are already accepted into college. AP classes certainly haven’t dropped their workload yet, and mixed with Senioritis, it’s like fighting an uphill battle,” she said.

Roy thinks the end-of-year events for seniors are what makes the fourth quarter bearable, but also believes the waiting to get there is a huge challenge. She said, “It’s like seeing the best cake at a birthday party, but having to eat a three-course slow-cooked meal first.”

Senior Alexa Draye also believes the end-of-year events are something to keep her energy up throughout the rest of the quarter. “The pop concert in band is something I’m really excited about,” she said.

As for getting herself through the fourth quarter, Polin believes her mom, a Mentor High School teacher, has been her biggest support. Polin said, “She gets to see senioritis up close every single year. She acknowledges how hard it can be to keep pushing, but every day she reminds me of how close I am to graduation and how I can’t stop before the finish line, so I have no choice but to keep pushing.”

As for Draye, she believes the person who has helped her stay motivated throughout the fourth quarter has been herself. “Every time I feel like not doing anything, I just tell myself that I still am in school, and I shouldn’t be the stereotypical senior that doesn’t want to do their work.”

As student council president, Roy is in charge of planning most of the fourth quarter senior events. “I’m worried about everything running smoothly, and I just hope that things will be memorable for everyone,” Roy said.

While Roy is excited to finish high school and obtain her diploma, she’s nervous about saying goodbye to the only place she’s ever known. She said, “I can’t imagine attending a school other than Mayfield, let alone living on a college campus.”

While Polin is excited about the future, she finds comfort in the fourth quarter as she’s also nervous about leaving behind Mayfield City Schools. She said, “I’ve been in this district since kindergarten, so these people around me have become so normal that leaving all of them behind will be jarring, to say the least.

“Change is always difficult, and transitioning from being around people I’ve known for over ten years to a completely new setting and crowd is pretty scary,” Polin said.

Polin wants fellow struggling seniors to know they are far from alone. She said, “Basically all of us are struggling, the end of high school is so close! But we have to keep pushing… you’ll be glad you kept trying when you look back on your senior year.”

Roy wants to tell her senior peers that their worth is not measured by their grades, but rather by the effort they put into earning their grades. “If we can remind ourselves that as long as we try and don’t give up, things from here on out will be as successful as possible,” Roy said.

Draye believes all seniors need to remember what they’ve been working towards. “We have been waiting this long. Now that things are kind of back to normal, let’s not throw it all away,” she said.

The final day of senior instruction is May 6.