District continues its focus on technology 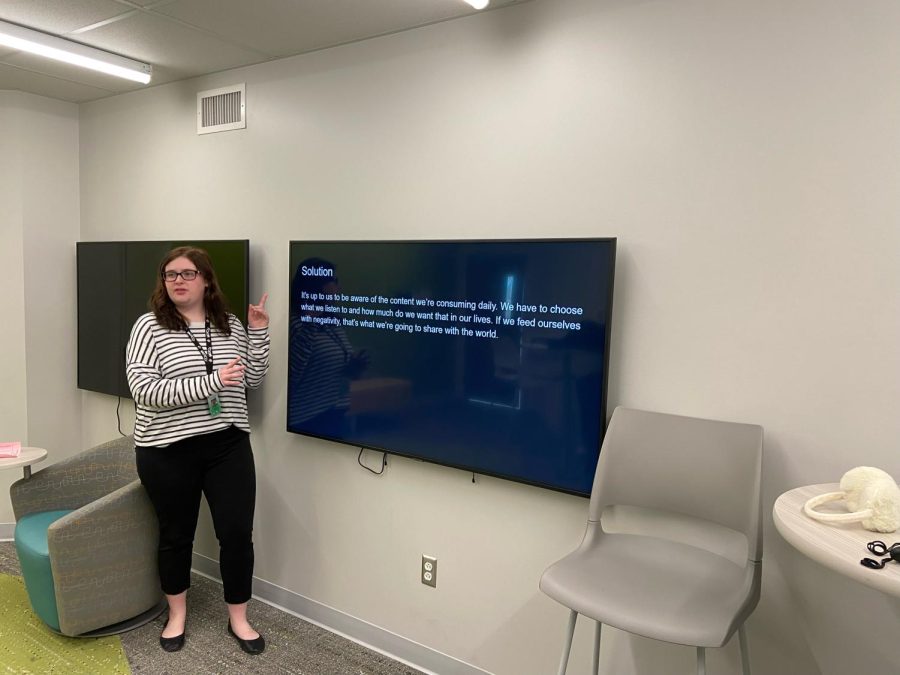 Student teacher Madeleine Polcyn instructs her English class with the support of a Newline Cast TV. School officials say they're committed to using technology as part of Mayfield's educational model. Principal Jeff Legan said, “Things are changing so fast, and we are constantly evaluating these conversations.”

High school principal Jeff Legan says the future of classroom technology may closely resemble initiatives already underway in The Option, an alternative learning program that emphasizes individualized learning. “If you take a look in The Option space, there are casting TVs everywhere, where students are able to use these as whiteboards and save that information for later,” he said.

Legan would also like to incorporate virtual reality in classrooms. He said, “This year, we had students utilize VR to do college tours. You can study the human body, anatomy, and physiology using 3D models, for a deeper learning opportunity.”

Plans to implement virtual reality in classrooms are still under development, according to Satullo. “We do have a few virtual reality setups with the Oculus… it’s still being worked on. I showed one of the Italian teachers how to use it, and she got on it with one of the geography programs and explored Italy.”

Programs being used right now such as Khan Academy and IXL reflect advancements in artificial intelligence over the past five years. Legan said, “[These programs] can know where your achievements strengths and weaknesses are and help build upon them based on the data. But more artificial intelligence can never mean taking away the role of a teacher.”

Satullo said that the district just recently trained the high school staff on using Blocksi, a content monitoring and filtering system for school-issued Chromebooks. “It’s just to allow for people to stay on task and work more efficiently. Pretty much everything we do is for efficiency,” he said.

Staff’s classroom computers will also see a major upgrade over the summer, according to Satullo. “We are going to be replacing all the desktops with 21-inch monitors, and all of the devices that we are going to be implementing will be running Windows 11.”

Legan is pleased with the district’s focus of providing technology. He said, “We know that textbooks are stagnant. If you are in a world history class, a year or two from now, the world has changed, but with technology you have many resources at your fingertips where you can research information.”

For more information on the district’s technology department, visit their official website.