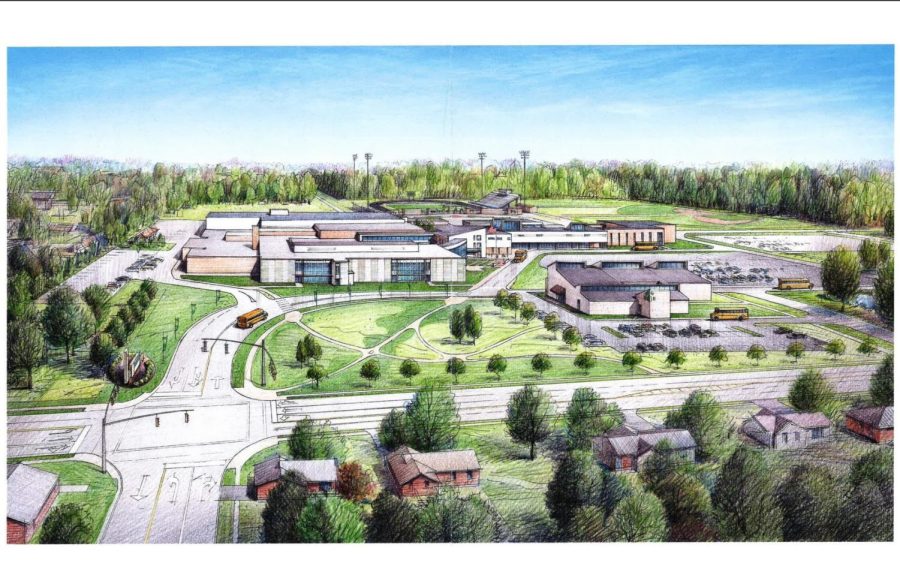 Principal Jeff Legan announced the school board’s plan of creating a new main entrance at the corner of Wilson Mills and Miner. “Miner Road is going to extend right into the high school, so there will be a new traffic light and a brand new entrance there. The current entrance to the high school will then become an emergency only entrance with a gate, as of right now,” Legan said.

There are over 80 high schools in Cuyahoga County, and Mayfield is one of the only schools to not have a speed limit sign or flashing lights for pedestrian safety.

Mayfield Village Police Traffic Bureau Detective Mark Justice believes there should be a school zone speed limit sign with flashing lights installed near Mayfield High School. “I’m kind of shocked that there wasn’t any. When I first came here 28-years ago, it was a shock to me why there wasn’t,” he said.

Justice has found there’s a substantial amount of pedestrian traffic near MHS. “The [vehicle] traffic is actually kind of high, especially during times when students are entering the school or leaving school… I say that area should also have a school zone sign as well as on Lander and Wilson Mills,” he said.

Highland Heights Mayor Chuck Brunello Jr. says school zone signs are typically for younger children in elementary schools. “In terms of just putting a school zone sign up just to slow people down [around Mayfield High School], it was never brought to our attention, ever,” he said.

Brunello believes there’s nothing to be overly concerned about quite yet. He said, “Kids are gonna be kids and they have lead feet; and the older kids are more excited because they want to get out of school to meet their friends.

“But if it ever becomes that big of a problem, like I said, we are here to help and make sure that it doesn’t get worse,” Brunello said.

Principal Jeff Legan believes the speeding problem around the high school causes some safety issues. “I think people just need to take their time in general, but they are always pressed. They are trying to sleep as late as they can and get here in a timely manner… and want to leave here really fast as well,” he said.

The high school traffic light at Wilson Mills is more of a pressing concern for Brunello. He said, “Even when there is nobody going by, there is a whole detection system with your tires on it and it takes forever. It’s a pain. It should have been addressed.”

No concern complaints from citizens or police departments regarding the speeding around Mayfield High School have been received by Brunello. He said, “You know what happens, though; people typically react after the fact and we do things once it’s too late, unfortunately. So, we would rather be proactive than reactive.”

During his 28 years in the MVPD, Justice has fortunately never recalled any pedestrians being struck near the high school. He said, “There could be countless near-misses that are usually not reported to us. They tell their family, ‘hey I almost got hit,’ but no one brings it to our attention, at least we can’t record it, but parents can bring it to the city council and discuss it there.”

Brunello suggested monitoring speed and traffic patterns at the high school. “We would need a couple weeks to a month to kinda analyze during the school year. I would say, let’s have a few guys up there: busy time of the morning, busy time of the afternoon, and try and sit and analyze to see if there is essentially a problem and see if we need to do something or not,” he said.

Current traffic studies have been put in place by the school board to monitor the best possible flow of traffic in and out of the high school. Legan said, “We also have an outside police officer that is supposed to monitor on a daily basis. And then Officer Stuart [Galicz], is a great resource, letting us know what it is that we need to do to make people safer and things more accessible without the amount of traffic we have had in the past.”

Brunello, a parent of two students at MHS, is now more concerned about the issue at hand. He said, “Now it’s going to be on my mind when I drive past the high school and when my kids leave for school. It starts at home, too. You continue to put these things into our kids’ heads.

“Hey, be conscientious of people around you, be aware of your driving, don’t be texting and driving. That is my concern and we are all guilty of it,” Brunello said.

Justice tries to have high visibility patrol areas near the high school. He said, “There’s occasions where they’ll set up radar. Sometimes they’ll do bus enforcement because sometimes people will drive around buses with their lights flashing, which is extremely hazardous.

“Other than that, I’m not sure what else can be done, short of putting school zone signs up there and enforcing that, if they put the lights up they should have someone there to enforce it,” Justice said.

Legan is unsure if the high school’s lack of speed zone signs has ever been addressed before. He said, “I don’t know if that is something that Mayfield Village would need to install, whether on Lander or on Wilson Mills. It’s a great question.

“And maybe even with the construction of the new entrance, that could definitely be something that could be installed,” Legan said.