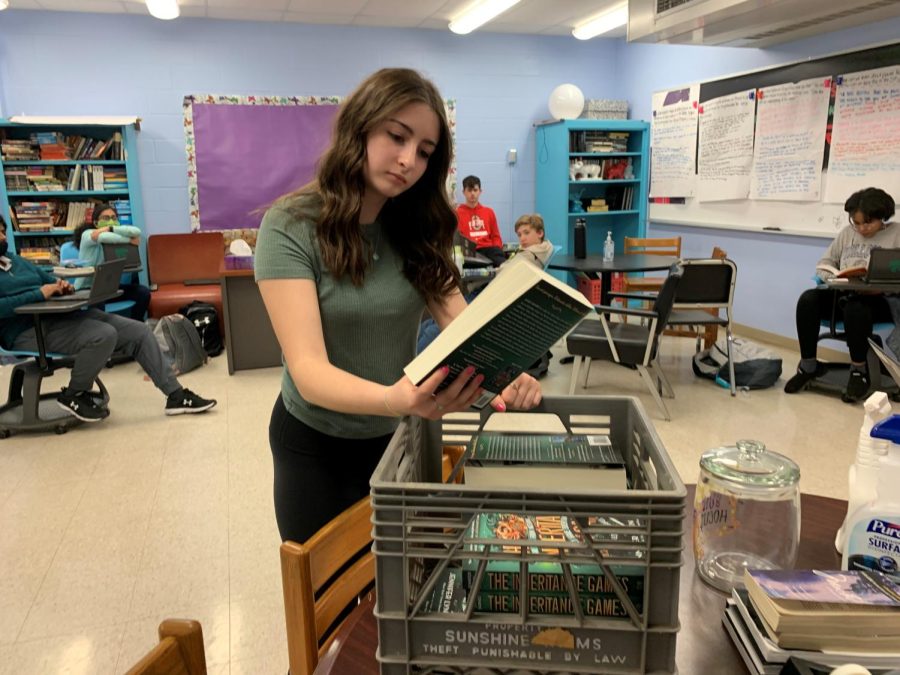 Freshman Nora Klein looks at a new copy of "The Inheritance Games," the next Wildcat Read selection.

“The Inheritance Games” by Jennifer Lynn Barnes is the 2022-2023 Wildcat Read summer book.

Students from Kerry Rutigliano’s English 1 honors class chose several books in groups for the student body to pick. She said, “[They] handled the investigative process and the discovery process and zeroing-in on texts that were both engaging to a high school audience and accessible to a high school audience and teachers in the Mayfield community.”

Staff and students then voted on the given books in February. “They had four choices. Students from the teams from the 9th grade honors class recorded their video and presented a naturalized presentation in terms of the title of the book [and] the summary of the text, what other people were saying about the text; so, it was an audio clip that was then pushed out in a Google Form,” said Rutigliano.

“The Inheritance Games” earned the majority of the votes and was declared the winner. The story’s about a 17-year-old girl named Avery who inherits $46.2 billion from a man she doesn’t know. In order to get the money, she has to live in his mansion with his four grandsons.

Freshman Nora Klein is a student in Rutigliano’s English class and thinks “The Inheritance Games” will suit the student body. She said, “The content within the book [is ideal for teens]. There is no strong language and it’s relatable to high schoolers’ standpoint.”

Rhea Deshpande is another freshman who voted for the Barnes novel. She said, “I had already read this book when it first came out, and I remembered how much I loved it… I thought it was a book that was meant for everyone at Mayfield. It has a thrilling mystery, a little bit of romance, a lot of drama, and it’s written very nicely.”

Sophomore Sal Palmisano thinks the book will be good to keep readers engaged to finish. He said, “I liked the plot of the book. It was very interesting.”

Rutigliano is proud that this process is student-led. She said, “Students picked it. Students put it on the table for others to consider it. So it is student-driven and as a result, kids listen to other kids.”

Over a three-week period of time, Rutigliano’s students gave a video presentation about why reading matters to the student body. Rutigliano said, “Gathering evidence, credible evidence, viable evidence, working together as a team and then tasking each member internally on their teams was a task in terms of presentation.”

According to Rutigliano, fewer kids have a desire to read, so the Wildcat Read is intended to promote literacy and a community of readers. She said, “Everything from the instant gratification of their daily diets in terms of social media and then often very inquisitive creative adept readers are no longer reading or the want to read has really taken a hit or deteriorated because reading is a process that takes time and effort and with a schedule that is so busy and so many things that are offering that you know are instantaneous satisfaction.”

“The Inheritance Games” can be found here on Amazon. Students should plan to finish the book by the first day of school in the fall, Aug. 25, 2022.