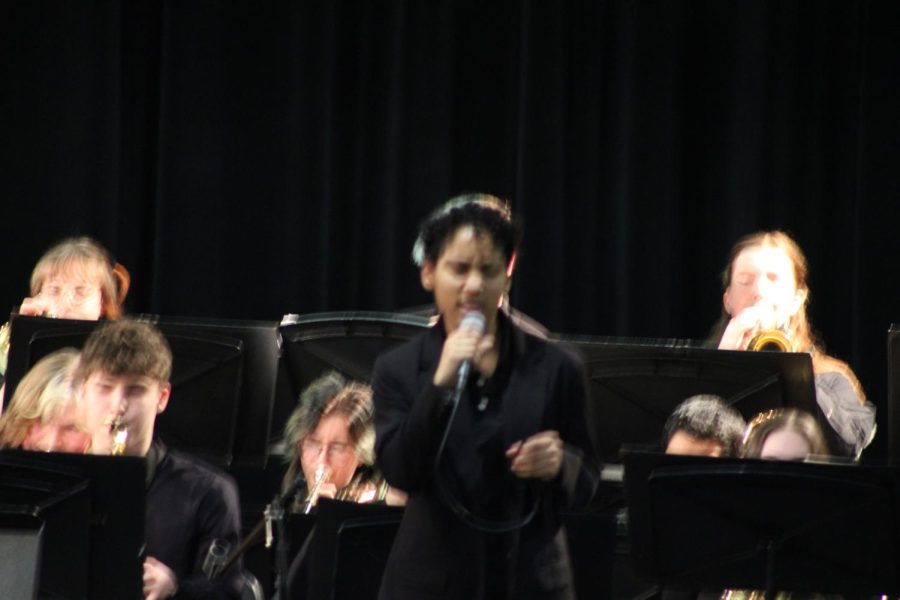 The Jazz Band performs a holiday song at their December concert.

Mayfield’s Jazz Band is set to perform at the upcoming spring band concert on Wednesday, May 4.

Treiber, with help from the band members, have selected songs that will challenge the group and allow them to expand their abilities. “I have a pretty good idea of what will fit the group. There is also student input, sometimes we play through a bunch of tunes and charts, and whatever speaks to the players in jazz band and fits the band we’ll roll with it,” said Treiber.

This school year’s 90-minute class schedule has changed the format of how the band practices. “[The block schedule] has really led to us being able to do a lot more and a lot more challenging music because we have the time to work on it,” said Treiber.

The jazz band will be playing more difficult pieces for the last concert of the year, such as ‘Arnge Drank’. Klein said, “There are many moving parts and it is especially difficult for the saxophones with challenging licks and a quick tempo, but the subtitle is orange juice with attitude.”

According to sophomore Erika Gathy, a harder song to perform is “What Is Hip.” She said, “It’s definitely the most challenging to play because of its rhythms, and [the] range it is difficult for the band to play together and correctly.”

Klein thinks the band has had plenty of opportunities to learn tough songs and get them ready for shows, as they’ve performed multiple times throughout the community this year. He said, “[At Schnurmann House during the holidays], we played tunes like ‘Jingle Bell Rock’ and ‘All I Want for Christmas is You’. It was just a really fun gig.”

Three new pieces will be played for the spring concert, which the band started preparing before spring break. Treiber said, “We typically need four or five to six weeks to prepare a piece.”

The spring band concert is free to attend and begins at 7pm in the auditorium on Wednesday, May 4.