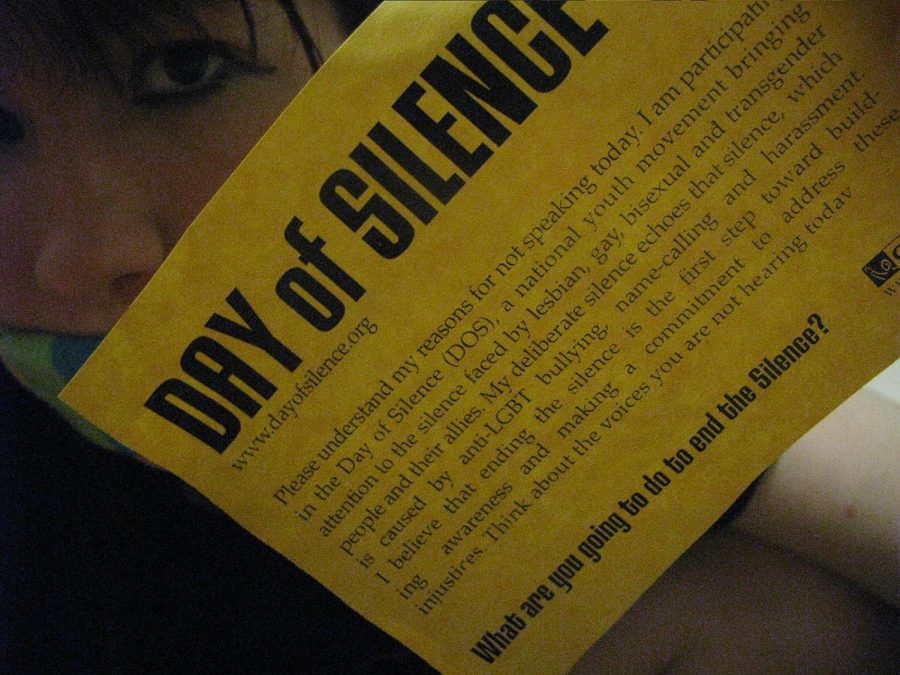 On Friday, April 20, some of the school’s most talkative students did not say a single word.

These students were members of the Gender and Sexuality Alliance (GSA), who participated in the National Day of Silence, an event used to bring awareness to bullying and harassment of LGBTQIA+ students.

GSA club officer Ilana Miller has known about the National Day of Silence for a few years, but began looking into it when the club was brainstorming event ideas at the beginning of this school year. She said, “At the beginning of last week, we realized that the Day of Silence was on Friday, so the club discussed it and decided we wanted to try to have Mayfield participate.”

When looking into the National Day of Silence, Miller completed research on The Trevor Project, a nonprofit organization focused on suicide prevention efforts among LGBTQIA+. Miller said, “Research has shown that having an affirming and supportive school significantly improves the mental health of queer youth. In fact, one study found that LGBTQ youth who had just one accepting adult were 40% less likely to attempt suicide.”

According to GSA co-adviser Kari Beery, another resource the GSA accessed was the Gay Lesbian Straight Education Network (GLSEN). This non-profit organization is dedicated to ensuring safe schools for all students, regardless of sexual orientation, gender identity or gender expression. Beery said, “[GLSEN] provides a lot of literature and information on how to actually orchestrate having a safe and respectable day of silence.”

Allison Rolf, the other GSA adviser, remembers the last time the school participated in the National Day of Silence was over five years ago. Rolf said, “We had gotten supplies from GLSEN, so we had stickers, face tattoos, poster signs, pins, and a bunch of other stuff like that. Since then, it’s been really hard with timing to get enough participation for it.

“But this year, we had Ilana Miller, who has been such an amazing leader for the club, come to our meeting and present the idea of bringing it back… and so we did!” Rolf said.

Miller knows for sure at least 10-15 people participated in the National Day of Silence at MHS, but estimates that number could be higher. She said, “Those individuals took one of the information cards we had available for students to show their teachers, which is how we know they participated. There is the chance people just used the digital copy of that card we sent out on social media, though.

“I know from people I talked to that a lot more were interested, too, but just weren’t able to participate on that day,” Miller said.

Miller, Rolf and Beery all believe with better timing and planning in the future, many more people will participate in events like the National Day of Silence. Beery said, “This is one of those things where you have such great causes you believe in and you want to do so many things, but I’ve learned over the years that as students, sometimes you just need to budget more time and planning and pick a couple of things which can then foster more information and gather more people.”

The GSA club at Mayfield has hosted other events regarding the LGBTQIA+ community in the past, most being centered around supporting the club pillars: Advocacy, Policy, Socialization and Education. “We typically try to have a [Solidarity Week] day where we ask students to sign a pledge of allegiance to the LGBTQIA+ community. We’ve had days of silence in the past, as well, and have had outreach programs to invite students to socialize and befriend one another,” Beery said.

Beery believes regardless of what topic a student is supporting, it’s important as an informed citizen to be in conversation with what’s going on in the world. She said, “My hope is that we’re all driven by wanting a safe, inclusive, loving community to thrive; so however a student wants to respond to that, [they] can take a seat at the table and start having conversations.”

According to Beery, principal Jeff Legan has been supportive of students using their First Amendment rights to stand up for causes important to them and their peers. “Typically, the administration just asks us to simply inform them about any kind of event— especially for things like walkout protests, because you’re actually leaving the physical building. Just a standard heads-up to ensure student safety and to be equipped to support those students,” Beery said.

For students looking to organize an event like the National Day of Silence, Rolf said to find a supportive staff member who can help get you in touch with a supportive administration team. “I know Mrs. Beery and I are here with the GSA, and there are wonderful other staff members who do some amazing things, as well,” she said.

Miller believes it is vital that students speak up, either through calling state representatives or by participating in events like the National Day of Silence, to fight back against anti-queer bills. She said, “We must make our voices heard and show that we will not accept this bigotry and injustice.”

For some, the steady reporting of anti-queer legislative actions can be distressing. Immediate support for queer young people who are considering self-harm is available from the Trevor Project by calling 1-866-488-7386, texting START to 678-678, or using the online chat on the Trevor Project website.